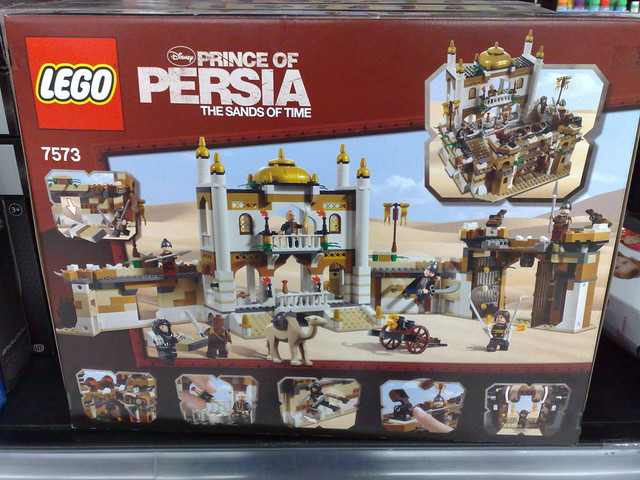 So let me get this straight… this is the toy of the movie of the video game.

I wonder if there’ll be (as there was with Star Wars and others) a Lego video game of it. That would be the game of the toy of the movie of the game.

(I remember playing the original Prince of Persia game in my uni days. Despite being a fan of the platform genre, I don’t think I’ve played any of the sequels. The Wikipedia article notes the author got the distinctive animation done by video-taping his younger brother, and links to one of the original videos. Very cool.)

9 replies on “The toy of the movie of the game”

And what is really frustrating is that the movie is not suitable for my 6.5 yo, although the merchandise obviously appeals.

This is just like Transformers, Wolverine etc. The movies are all highly inappropriate for young children and yet tell me what teenager is going to want a toy transformer?

I remember Lego when it was much less complicated!
PS “being a fan of the platform genre” – is this a reference to PTUA (or Geek-speak?)

@Roger, I’m sure you can figure it out if you read the sentence again. The context is crystal clear.

Stop bubble wrapping your kid. The Prince of Persia movie is suitable for kids.

If anything I wish Disney would stop putting out these kinds of movies as they are always dumbed down for children. Disney stuffed up Narnia and now they’re stuffing up Prince of Persia.

@OzSoapBox, hint: You’ll never get anywhere trying to tell parents how to wrangle their kids.

My rule of thumb for older kids is that if a movie was rated M here, but PG-13 in the US, that’s a sign that it’s not particularly strong stuff.

It’s not bubble wrapping! It’s understanding that there are experts who sit down and classify these movies as such for all sorts of reasons and I’d hazard a guess that the average parent without a child psychology degree often hasn’t a clue at the nuances in an ‘M’ movie that make it unsuitable for their child.

Watch it through and decide for yourself by all means, but I don’t take my 6 yo to M rated movies.

It might not be bubble-wrapping, but are you sure that those that are putting the ratings on movies aren’t fundamentalist religious types who slap M/PG-13 ratings on anything that disagrees with their distorted worldview?

@Mike, until Family First runs the country, it’s the Classification Board, which you can read about here: http://www.classification.gov.au/

@Everybody: I guess each of us has his opinion when it comes to raising children, different principles and beliefs. However, these differences are not supposed to hurt or offend anybody intentionally, I guess that’s why there is THAT “freedom of speech” thing.

@Rachel: I think wolverine, transformers etc. were “for kids” when they were shown as cartoons on TV before. These “cartoons for kids” shows were portrayed with much violence in t he movie, don’t you think so?