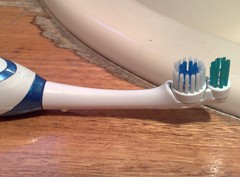 In the past I’ve been unconvinced by the benefits of electric toothbrushes. They just seemed like a gimmick to me.

That was until at a checkup last month when the dentist noted that the kids might well find them better, to counter less-than-perfect manual brushing. He recommended the Oral B brand specifically (interesting since the “show bags” from there generally include Colgate stuff).

Perhaps coincidentally Oral B currently has an advertising campaign for its electric toothbrushes.

So I picked up a couple of electric toothbrushes for the kids. I wasn’t going to bother for me, since my manual toothbrush is new, and I think my technique is reasonably sound; I just don’t floss as often as the dentist would like — but does anybody? But then by chance I found a third electric toothbrush, still sealed in its wrapping, in my bathroom cabinet. I don’t actually know how it got there, but I have a feeling I might have bought it for my dad a couple of years ago, who then he decided he didn’t want it. 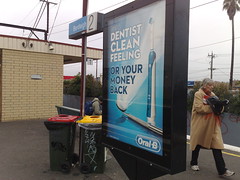 The main change is the brushing style. Obviously the toothbrush itself does the round-and-round brushing motion itself, so there’s no need to do that manually. In fact, emulating the dentist, and going slowly around your mouth, from the tip to gum of each tooth, spending 30ish seconds on each quarter of your mouth (top/outside, top/inside, bottom/outside, bottom/inside) seems to be the way to do it.

No matter what the technology, technique counts for a lot, so we’ll still have to make sure everybody’s brushing effectively, even if the toothbrush is doing more of the work.

What’s everybody else use? What’s your dentist say?

Apparently, Procter & Gamble sponsored a dental conference in the Bahamas earlier this year. The company paid the expenses of hundreds of dentists from around the world to attend. I’m just trying to recall the brand of toothbrush that P & G make ….

Yes indeedy, Oral B is owned by Procter and Gamble, according to Wikipedia.

Me and T have had an electric toothbrush for ages – one brush, with a storage holder for two heads, so we just have the one machine in the bathroom. Just replaced the last one, for around $40 at Priceline. The last one lasted abour 4 years, so if this one does the same, that is $10 a year, plus the cost of the heads. The replaceable heads can be bought for around the same price as a regular toothbrush now ($2-$3 each) if you know where to shop.

I’ve found I am more conscious on brushing morning and night, than I used to be. And I feel like I get a better clean with this thing than a manual brush.

The kids are now wanting to brush their teeth before bed (methinks is a ploy to stay up later!) so I may look at getting them a battery one each when I next need to replace their toothbrushes.

PS – your research states Oral B is owned by Proctor Gamble. Did you happen to notice if Braun was in the mix of owners/companies involved? I’m pretty sure ours is a Braun Oral B. Might be wrong there though!

Wikipedia says Braun is also owned by P+G, and you’re right, I’d noticed in the shops that some of the Oral B toothbrushes are co-branded Braun.

I wouldn’t use anything else but electric. Teeth feel so much cleaner.

i was completely skeptical about electric too – until I tried it! Have settled on a battery operated one as their just aren’t enough powerpoints or bench space in my bathroom.

Definately feels cleaner for longer and results at 6/12 dentist checks have improved.

I have the oral b electric. I don’t think it makes much of a difference really. My teeth are the same color and cleanliness they always were. What I like is the one I have has a charging stand, so no battery replacements. But I think that if you want super clean smile you really do have to do your dental care on schedule.

I have had an oral B electric brush for about 3 years, I also have a normal brush. I find that the electric brush makes my teeth feel cleaner. I haven’t been to the dentist in years!!

I was skeptical for years too and resisted using electric toothbrush until my mum bought me one for Xmas. Now I love it! I have had trouble with my gums in the past (bleeding when brushing, receding), but since using the electric, all those issues have cleared up. I think it’s easier to get good technique with the electric toothbrush.
I hold the brush against each tooth surface for a count of 1-2-3 and then move onto the next one. (for molars, thats 3 surfaces: front, back and then the chewing surface; for the front teeth, it’s just the 2 surfaces)

I have an oral B with a charging stand – I store it permanently charging in the bathroom, but a full charge lasts over 2 weeks so I don’t need to take the charger with me when travelling. If I’m going for longer I’ll pack a manual toothbrush

I stock up on the brush heads in multipacks when they are on special at Priceline or online.

I have had an Oral-B for about 10 years and it’s brilliant, but in the past 12 months they have jacked up the prices to disgusting levels. It is now nearly $10 per brush head, and they last 3 months each. That is unacceptable. I’ve tried the various knock-offs available on eBay and they’re rubbish.

Real Oral-B heads are far cheaper in the UK, but are deliberately not available to overseas customers on sites such as Amazon. In view of this set of circumstances, I can’t recommend Oral-B electric toothbrushes anymore. If the Colgate ones work as well and are cheaper, I’d recommend them. But I haven’t tried them yet.

Yeah I have some of those right now. They don’t fit properly and they break easily. Yet they have packaging that is a perfect copy of the real ones. It’s really strange.

I also have a Braun rechargeable electric toothbrush and my teeth do feel cleaner than with a manual brush. It has an inbuilt timer that briefly stops and starts the brush a few times at 2 minutes so you can be sure that you are burshing long enough. It is similar to the one on the avertising board in your photo. Braun has several models some of which have LCD displays to stick to your mirror to guide brushing. I have a basic model.

There are toothbrushes for kids that play a song through vibrations directly into the skull and if the kids brush until the song is finished they will have brushed for the recommended time.

I do manual brushing. I guess I’m still at the point of being unconvinced..

This is quite a coincidence!

Only last week, I visited the dentist to have a cap refitted (it’s fallen off several times but that’s another story) and he mentioned that although my teeth were fine, there were some signs gulp) of gum disease.

I was instructed to start brushing gums, too (which I have been) and to use dental floss! Now I do use floss anyway from time to time but (1) it’s very time-consuming and (2) it always manages to cut both my gums *and* my fingers and I *hate* it.

However, as someone who is obedient of authority (yeah, right) I have been following the dentist’s instructions religiously since then. I have an appointment with the hygienist next Friday for one of those periodic “deep cleans” and I’ll be interested to hear what she has to say.

I’ve found myself flossing much more often now that I’ve got a box of those weird toothpick-dental-floss contraptions. You can sit watching TV and at the same time ensure that there aren’t any lumps of food rotting between your teeth – no need to hang out in the bathroom; it seems to have broken through a barrier for me. And they’re hella cheap, $3 for 100.

I use an Oral B with a two-minute timer. I do two minutes on top, two minutes on the bottom, including the gums, then brush my tongue. I used a regular toothbrush until about three years ago. The electric gets my mouth a lot cleaner. Love it.

I also floss daily. Flossing makes a huge difference in oral health. Once you get used to it, it doesn’t take long, doesn’t hurt and won’t make you bleed. My mouth feels so much cleaner when I floss, and skipping even a day just feels gross. It’s not so bad! Try it!

Love the oral B, but I have TMJ, which makes it hard to open wide enought to do the back furthest molars properly. So I manually brush & do the oral B.