City of Melbourne have announced a change to the fines for littering smokers, with the fine going up to $234 for throwing away a lit cigarette.

Smokers or non-smokers, it just staggers me that some people are such slobs. 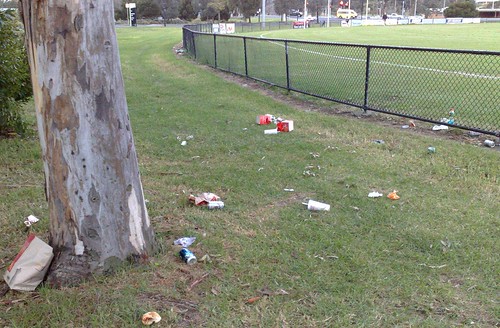 Regularly, I see footy-goers at the Parkside Edgewater oval (Maribyrnong) rock up to watch a local footy game, sit in their cars eating, and throw their food wrappers and bottles and other crap on the ground afterwards and just drive off. Absolutely breathtaking.

What the hell are they all thinking? Do they leave crap around their own homes as well?

Someone comes along in the following week and cleans it all up (probably at the expense of the local ratepayers), and then at the next game a week or two later, they do it again.

(Dear City of Maribyrnong, if your officers want to earn some fine revenue for littering, Parkside Edgewater during a game is the place to be. But take back-up.)

Or otherwise, perhaps the Doctor can do something about it.

16 replies on “People are such damn slobs”

“Do they leave crap around their own homes as well?”
In the case of my teenage kids, YES !
So I think the litter-bugs genuinely think it is someone else’s job to clean up after them (just like kids think it’s their parents’ job to remove their crap from the floor and put in the bin/ washing basket/ draw/ cupboard, etc)

Here you go again Daniel,taking the high ground.Perfectly safe to have a go at people who cause litter and you wont get any argument from me on that score,as it is disgusting,but where are the rubbish bins?I cant see one in sight!
As for a $234 fine have you even stopped to consider that is a weeks money for a pensioner.How would you feel if they slugged you $1200 for dropping a butt?and who advises all the tourists to Melbourne what they could be letting themselves in for?
Still I suppose it will be another nice little earner for the Council!

As far as advising tourists, I wouldn’t litter in Singapore as I’ve heard it’s very strict about littering, why can’t we have the same reputation? There are pigs out there, I’ve seen Maccas bags go flying out of car windows as they are driving, when I passed the car it was full of young girls.

As with driving while talking on the mobile, littering is a law that’s hardly ever enforced because there are too few police around and the ones that are have other priorities.

Our society is addicted to convenience, so what if there are no bins around, take the bloody rubbish with you.

One of the first things I noticed about Taiwan is the lack of public rubbish bins over here.

You’d think that’d mean the country would be swimming in rubbish but it’s not, even in the towns it’s remarkably clean.

Here people actually take their rubbish with them or have plastic bags in their cars and what not.

Blaming public slobbery on ‘waaah there’s no bins’ is a copout. Just another reflection of the Australian ‘let’s blame somebody else‘ society.

This is my pet hate. It saddens me so much when I see litter and this year I received a grant from my council (Moonee Valley) to run The Flemington Litter Ninjas. Yes, that’s why my avatar thingy features me in my old karate gi, goofily posing for the local paper.

Essentially it’s just getting locals to adopt a street – or one side, or half of a street – to keep clean, maybe ten minutes or so once or twice a week. Long tongs, funky t-shirts (with our logo) and badges are provided. Nothing startling, but I’m absolutely stoked to have 26 other people willing to be ‘ninjas’ in our suburb which is fringed by pubs, takeaway outlets and public transport hubs. It seems that the average drunk bogan buys a cheeseburger from Maccas on Racecourse Road, staggers through the streets to catch the 59 tram from Mt Alexander Road and finishes his 3am dinner right in front of my house, where all the boxes, wrappers and bags are dropped.

People often say to me, ‘So how are you going to prevent people from littering?’ This is almost impossible. It seems that whether there’s bins or no bins, people choose to litter. I don’t think I can influence them either way, which is unfortunate. What I can do is set a good example and tidy up spots where the council doesn’t or where it bothers me – like my own front fence!

No bins? So what! What kind of mentality do people who sit in cars and throw stuff OUT of them have?! It’s ludicrous.

If the councils which control areas with lots of visitors, shops selling food, drinks and icecream to walk-up visitors, don’t have any bins, then I assume they want me to drop the rubbish any old place. They get what they want.
I carry a bag for rubbish in the car but I am not going to cart ice-cream wrappers or empty coke cans around with me all day on a bus or train, get real.

You can say that again Daniel.

Daniel, you forgot this timeless classic:
http://www.youtube.com/watch?v=R_KW8hlkVEc&feature=related
Do the right thing, everybody!!

@Keith, that’s true, there are few if any bins in that location, and some locations in parks definitely need them (eg picnic table areas, BBQs) but do we really need to fill every public place with rubbish bins just so people won’t litter? Particularly for people in cars (which is who causes this), it’s just not that hard to take it with you.

Pensioner, or anybody else, yes $234 is a lot of money. But it’s entirely avoidable, and anybody with any hint of commonsense would know that it’s wrong to throw away a lit cigarette. Why would anybody think otherwise?

Does the typical tourist have the expectation that it’s somehow okay to litter somewhere they’re visiting? Do they need a brochure in 17 languages reminding them of everything what is against the law?

@Kath, there is a theory that littering is more likely if there is existing litter. I suspect that’s probably true, though a place being spotless of course doesn’t stop the thoughtless. I like the Litter Ninja idea! (During a short period where I did a bit of bushwalking with my friend Josh, he always made sure to take some bags and pick up what we found. Litter in national parks is rarer, but even more objectionable than in the city.)

Very many people think it is ok to throw their cigarette butts anywhere they please. If you look towards the ground almost anywhere in the city you are sure to see one. This is especially so in the CBD. I wonder if this problem is worse here in Australia due to the indoor smoking ban. People are much more likely to find an ashtray when smoking indoors. I do agree that if an area is well kept it is less likely to attract additional litter. All it takes is a few butts or wrappers scattered about to make people think that ot is ok to leave theirs there too. In the begining it should be quite easy to observe and fine people for littering with their butts.

@enno: if you can’t dispose of the waste, don’t buy the crap. You’re just being a pathetic cop-out.

@keith: you’re just like the losers who smuggle drugs through south-east Asia and then complain about the penalties when they get caught. Not knowing the law is not a valid excuse. Tourists shouldn’t be littering, and neither should locals. The fine should be high, and would be even better if it rose proportionally to income, as speeding fines do in some European countries.

One of my pet hates is the theory that “if we take the bins away people won’t litter” which saw councils taking out bins some time ago. There should be bins in appropriate places (eg tram stops, parks with picnic tables) so people who are clever enough to use them can.

A mate of mine has worked on some recent “bin your butts” campaigns. I particularly like the one in the CBD constructed of cigarette butts found nearby:

I’d like to see a few ‘stings’ whereby police set up a bunch of cameras and film everyone littering at a public event, then send them fines in the mail and a link to the film footage of them littering.

While its only going to help for events, it’ll give them something to think about anyway…