Next Thursday marks 25 years since the completion of the City Loop. Flagstaff Station was the last loop station to open — on the 27th of May 1985.

It’s the only station in Melbourne that is closed on weekends — being in the middle of the legal precinct, it’s a bit quiet around there on Saturdays and Sundays, though there are increasing numbers of residential buildings in the area.

It’s probably the least used of the CBD stations. That said, with a lot of office buildings nearby, it gets pretty busy during peak hour, but is quieter in the middle of the day and in the evening. 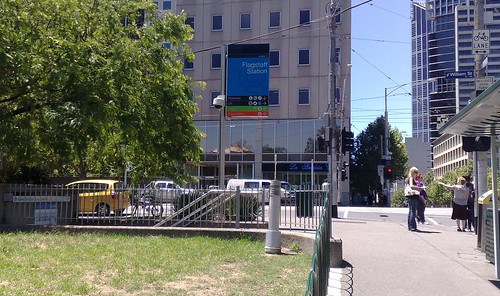 It’s named after the gardens above, of course. The gardens in turn are named after the flagstaff, erected on the hill in 1840 to signal ships in the bay. This entrance is in the corner of the gardens, and saves you crossing Latrobe Street if you’re headed for the north side of the street. This picture was taken a few months ago, after the Connex logo had been covered up, but before the Metro logo had taken its place. 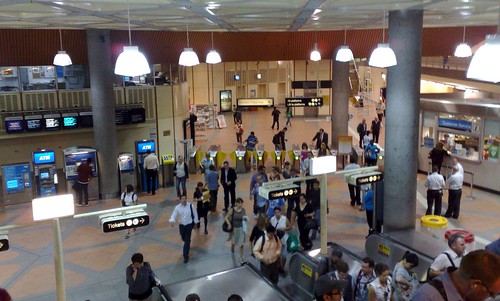 In the morning peak, as each train arrives, swarms head up the escalators, through the fare gates on the concourse and then up more escalators to William Street. Chuggers, when present, are just outside the fare gates, and it’s also where you’ll find the not-very-busy Myki Mates, and Authorised Officers (inspectors). I quite like the main concourse; it feels very spacious, very airy for somewhere underground. 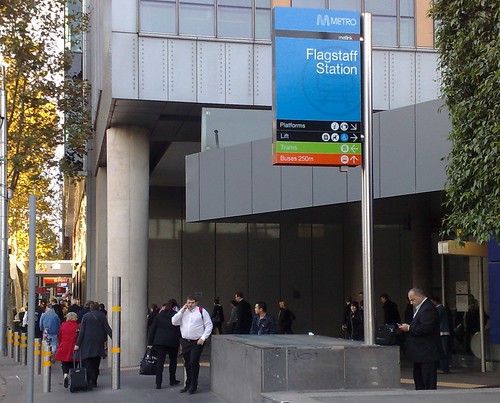 Most people head out onto William Street, coming out in the shadow of the huge adjacent Commonwealth Law Courts Building, and flooding William Street’s southbound footpath. In the evening peak the tide comes back the other way. The building includes the Family Court, and metal poles in the footpath around this area are to protect from attacks with cars. 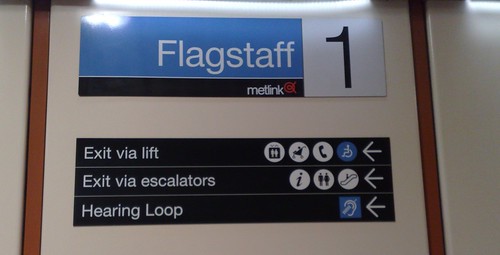 Thankfully the Connex logo didn’t get onto everything. This signage didn’t need to be changed when Metro took over. It’s amazing how many people should probably use the lifts but don’t look for the signs, and can be found trying to get their bicycle or pram up the escalator. 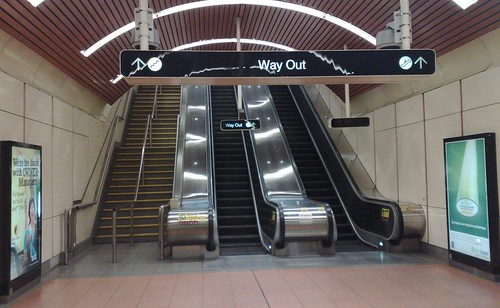 Outside peak hour it can be dead quiet (not helped by less frequent trains, and agonisingly slow escalators). This picture was taken in the middle of a weekday. 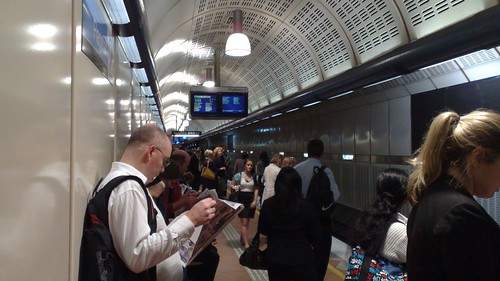 By the time evening peak rolls around, the platforms fill up again.

Barely noticeable on the platforms are these little signs, warning future renovators to come of the precautions they should take.

I don’t mind the design of Flagstaff. It doesn’t have to cope with the influx of people that Melbourne Central does, so it gets away with not having the open platform design.

And for a station designed in the 70s and opened in 1985, the interior design hasn’t aged too badly.

Of course I’ve passed through many many times, going home on trains around the loop, it always feels strange to actually get off there. I seem to do it about once every 6-12 months (vs passing through 5x per week)

It’s a bit dead late at night too. There seems to be about 5 people waiting for my train when I sometimes get one home at 10:30pm.. which really isn’t that many (there will be more waiting to board at some of the suburban stations going outbound)

(And speaking of quiet, I caught a late night inbound train on the Alamein line last night, coming back from a friends house. It literally had nobody on it except the driver when it came in to Riversdale!)

I sat on that concrete block outside the family court under the Metro sign a couple of weeks ago and ate my sandwich. I may not have sat there if I knew what the poles were for. All Loop escalators are slow to the point where they are hard to get off easily. Do they still speed them up for peak travel times? I seem to recall where there were two in one direction, one set would be faster than the other. And why did they remove the keep to the left signs?

Ahh memories… I remember getting up *very* early that morning and meeting up with a mate to catch the first train that was going to stop there. From memory we had to walk to Glenhuntly to catch it (from Elwood).

When we came in to the new station we pulled the doors open just a bit before the train actually stopped and made sure that we were first out.

Unfortunately we were in the back carriage and all the media were at the first carriage and surrounded a guy who stepped out. He became the “official” first passenger and if I remember correctly got a free yearly ticket.

Oh well. At least I managed to buy the first ticket, numbered 000001 from the ticket office, and I got some brochures about the new station stamped with the station stamp and the date. I’m sure they’re buried away in a bottom drawer somewhere.

That is so cool !

The only time I ever actually wanted to go there, on a weekend, the stoopid train didn’t stop. I dunno whoever thought of that dumn idea.

@Andrew, I don’t know if anything like that’s happened recently, but it did memorably occur when the Family Court was in Bourke Street (Marland House).

@Mike, thanks for that recollection, very interesting!

Check this ad from The Met from a newspaper, announcing its opening

@enno, originally it (and the rest of the loop) was open Monday to Saturday. In the late 90s they opened the loop on Sundays as well, but closed Flagstaff all weekend.

Flagstaff gets a lot of use in the morning and afternoon peaks from people who come from Craigieburn or Upfield but want to go to Southern Cross for access to Docklands. Rather than go all the way around the Loop, its quicker to swap platforms at Flagstaff and catch a train going back towards SC. The reverse happens in the evening
..Paul

When the PTUA campaigned against the closure of General Motors (station) a few years ago, I felt that the energy would be much better spent campaigning to keep Flagstaff open at all times.

I reckon there’d be a lot more people wanting to use it per weekend day, than the 4 people who used GM each day.

Paul, I’ve done that – the “Flagstaff Shuffle”(or city-loop-shuffle) – in the afternoon/evening, if I’ve just missed the train to Upfield at SC. Most handy, but the timing has to be JUST right.

I’ve really only used Flagstaff properly when heading in for jury duty. The slow escalators are painful.

Why would Flagstaff Gardens Station only open on school days. It was opened during the 2006 commonwealth. Hard to get to Queen Victoria Market.

@Kiwi Nick, yeah I think that’s a fair point, and with increasing residential development in the area, it’s got to be worth looking at again. Also note the connection to the 55 tram to the Zoo and to the eastern side of Crown can’t easily be made on weekends (though in the case of the Zoo, there’s a train option to get there).

@flerdle, happily, like all Loop stations, at peak hour the escalators run faster than the midday/weekend snail’s pace.

@Phllip, It is not hard to get to the Vic Market when Flagstaff is closed. It’s a 5 minute walk from Melbourne Central up Elizabeth Street.

I do like Flagstaff station – Like Ben noted, it feels very international to me, and I can’t explain quite why. Although, I was going into work today (Saturday) and wanted to get out at Flagstaff to get in a bit of a walk on a sunny day instead of just getting out at SC and walking across the road, into the office. It wasn’t until we entered the Loop that I remember. A pity; I do think it would have greater patronage over the weekend these days.

They had to put big wire hoops at the corner entrance to the station in Flagstaff Gardens as people had been cutting through the park for years. Don’t like it and expect someone is going to get an angle-grinder and get rid of them so they can go back to using their shortcut.

I once had to get off a train at Melbourne Central as I got confused as it which direction it was heading from Flagstaff.

“the metal poles in the footpath around this area are to protect from attacks with cars.”

This might be the most disturbing thing I’ve read in a wee while. Gotta love humanity.

I’m with Ben in that Flagstaff is inextricably linked with jury duty in my mind. I don’t recall using it either prior to or since my lone one-week stint in 2005.

@MC, I think that threat is probably peculiar to the Family Court because of the obviously emotional circumstances of some of the cases they hear. Such an attack did happen in 1986 — see link below. (I thought I recalled something in the early 90s, though I couldn’t find a reference to it, so maybe I was thinking of the 1986 instance.)

Does anyone know who manufactured the furniture on the platforms at the station or where l could find out? I am interested in using the same metal sheeting in a bench l am designing.
Elroy

Flagstaff is my “home” station on weekdays as I work nearby… nice to read some info on it from the perspective of those who spend less time there =) That old clipping from the Age seems hilarious in hindsight. Can’t believe it used to be non-existant!