My old uni buddy Brian recently emailed through a copy of a photo from graduation day at Monash Uni, from 1993. 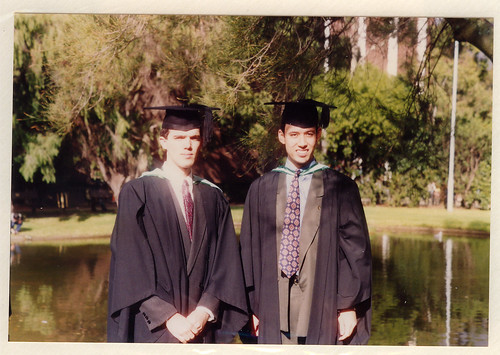 It was at the main Clayton campus, which we rarely actually went to in our student days, though I do recall one memorable session in the campus radio station recording a demo tape of us being comedy DJs with Nick Marvin (then student newspaper editor, now CEO of the Perth Wildcats NBL team) which, to my knowledge, never got broadcast.

Brian and I started uni in 1989. Our degree — Bachelor of Computing (Information Systems) — at Caulfield campus was meant to be three years, but Brian did Honours, and I… uhh… well, I failed a core subject in second year, and thus was a year late finishing. But I got to do some extra electives as a result which taught me some really good stuff I’ve since used in my IT career.

So we both finished in 1992, and by the time graduation day rolled around, we were colleagues, fresh-faced graduates in a small team somewhere inside the machine of corporate Australia, and travelled down to Clayton for the day to put on the gowns and silly hats and get our degrees.

Being the serious young men that we were, in the learned grounds of the campus, we took a few minutes to thoughtfully ponder what the future might hold. 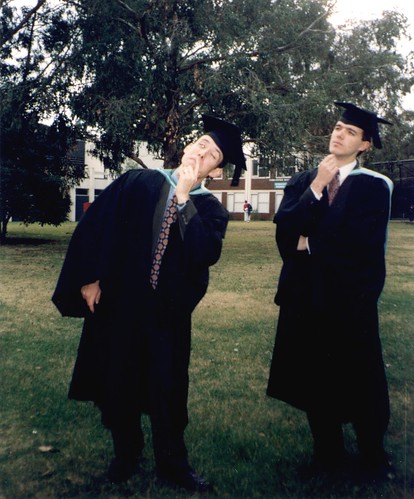 (Thanks to Rae for digging out an old pic and inspiring this post.)

I wonder how many graduates are still working in the same field almost 20 years after they left uni? Well done, Daniel.
PS I went to Monash and got a “Clayton’s” degree (if you get the old joke) – You got a Caulfield one.

Those photos have very very handsome blokes. You are the most handsome bloke in the photo. You look very young and very familiar.

And do you still know each other? What did you used to do with eachother?

Did you find yourself as a Caulfield student, doing most of your exams at Clayton? It was the opposite for me- sat more exams at Caulfield Racecourse than anywhere else!

Hey, at least you got photos! My dad forgot to put film in the friggin’ camera (it was 1989 so I’m a bit more ancient than you) and this was after he, my grandfather and I, each representing the first of our generations to graduate from the same uni, posed for hours.

The ‘graduation’ photo, taken a month later, wasn’t quite as celebrative. I’m standing by the back of the house against the cream bricks, wearing a borrowed science gown (I was arts), with just Mum and Dad by my side and holding a rolled up calendar….. *sniff*

@Phillip, yes, we still know each other, though he lives in the USA now.

@Andrew V, no, we had some exams in the various halls around Caulfield campus, or in the racecourse buildings. I don’t recall any at Clayton; it was very rare that I went down there, in fact.

Nice photos. You’re cute when you’re younger! Your friend is cute too. I love the photo the two of you are trying to think. HaHa

Nice comments, thanks everyone :) Daniel and I met in first year; its interesting how similar people will just gravitate towards each other. Our group of about a dozen guys hung out together most of the time, quoted Monty Python, marvelled at Usenet and IRC and other nerdly college activities.

Daniel was instrumental in getting me my first job, for which the whole interview consisted of Andrew (the boss) saying to Daniel “So, is this guy any good?” Daniel: “Oh yeah…” (in a casual Aussie sort of way), and I was hired :)

In our time at uni, when we weren’t skipping lectures, I wrote a very silly sci-fi serial called “Rocket Roger” (it’s probably in groups.google.com somewhere) while Daniel wrote Toxic Custard and we worked together for many years at Telstra, till I ran off to join the Internet Revolution at Sausage Software (remember HotDog, the HTML editor)

I’ve lived in the USA for about 10 years now, about to get married again, and will be visiting Oz June/July with my new fiancee, who really, REALLY wants a picture holding a koala! Are there places that allow that?

Ahhh … Monash Uni … I was there doing a Science/Engineering double degree between 1998 and 2003, same year Andrew V above started. For both of us first year started with an 8am lecture of Pascal programming with lecturer ‘Capt’n Snooze’ every Tuesday and Friday (exciting stuff!!)

Likewise I did a handful of exams in the Engineering Halls at Clayton, but did everything else at Caulfield Racecourse (think I had one exam at the Caulfield Campus)

Brian – I think it’s illegal in Victoria and NSW, but the Gold Coast is likely to accommodate…… actually here’s some info

They were still teaching Pascal in 1998 ? Sheesh

I remember Rocket Roger! I think Daniel may have posted excerpts in the old Toxic Custard…. Good to put a face to the name…

I can vouch for Andrew S on using Pascal in that subject! didn’t mind using it- was pretty easy to understand for someone who ain’t big on programming! And if you thought using Pascal in 1998 was bad, back in 2000, for astrophysics, we used FORTRAN to run models of solar systems! By the way, FORTRAN came out in 1957:
http://en.wikipedia.org/wiki/Fortran
By the way, if you’re wondering why we used to call our lecturer Capt’n Snooze, it wasn’t due to boring people- he looked like Capt’n Snooze!

Pascal was specifically designed to encourage good programming, so it’s not surprising it’s used in education (I learnt it in year 11/12).