If you think with the traffic, sprawl, crime and the crowding the city’s going down the toilet, just check this almost hopelessly optimistic, positive report on Melbourne from 2005 for the Johannesburg Star.

After spending five days in Melbourne and the state of Victoria, it’s easy to see why Australia so appeals to South Africans and why it so successfully hosts cricket and rugby world cups, Olympic Games and now the Commonwealth Games. There’s order; laws are obeyed; it’s clean; and there is no crime. Well, very little of it anyway.
…

We walked the streets by day and night, backpacks over our shoulders, cameras and cellphones in our hands, and not once did we feel crime was lurking around the next corner. That’s life in Melbourne.

Actually I don’t really have an argument with that. Crime is not really that common in most areas, and I struggle to think of a single instance when I’ve felt unsafe while walking around, even at night. Though maybe I stay out of the troublespots. 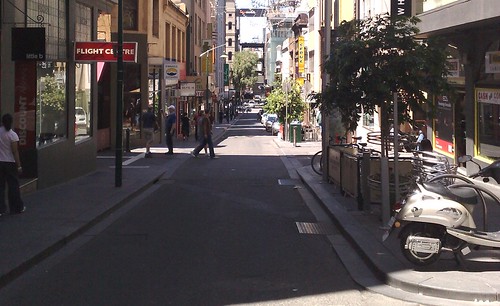 It’s a beautiful city: the streets are lined with trees, pavements are wide enough for people to walk freely, and there are no hawkers, beggars or vagrants. While many people in the suburbs own cars, most city dwellers, living in CBD apartments, get around by taxi, train and the city’s state-of-the-art tram system. Many also use bicycles and they are rarely even locked with a chain when left unattended day or night.

heh. Well I don’t think for a moment that’s all quite true.

The houses (minus high walls and razor-wire) are neat but far from lavish.

No arguments on the lack of razor-wire, but I guess like many tourists, these guys didn’t go out to see any of the McMansion suburbs.

Many will say there are too many rules, laws are enforced too strictly (there are police officers in plainclothes all over the place fining motorists, jay-walkers and litterbugs) -but isn’t that what we all strive for – order and peace?

An interesting perspective on the claims of Victoria turning into a “nanny state”. Plainclothes police issuing all those fines? I find that hard to believe. The closest I’ve seen is Authorised Officers/Inspectors on trains and trams.

You can read all of it here.

13 replies on “Through others’ eyes”

Thanks for sharing that report – how positive! Yes, Melbourne has a lot going for it. But, I guess almost anywhere is better than Jo-burg.

I was on a shuttle bus recently in Melbourne and a South African gentleman was having a conversation with another person about pretty much the same thing. He said he was in a park the other day, and there were familes there! With little children! And at one point a mother who was there on her own (!) left her seat to run after her todder (who was able to run around away from her mother!) and she left her bag on the seat! And noone took it! And there were no gangs around screaming at each other! Sorry for the exclamation marks, but he was so enthusiastic.

Wow they obviously didn’t venture out into the western suburbs!

You don’t even need a cellphone or backpack to get jumped there in the middle of the day.

Now it is Melbourne in Australia that the author is referring to?

I personally have never felt unsafe here in Melbourne or Australia. I do sometimes see people here do things that would be considered careless or foolish behavor in the US such as leaving a ladies handbag on a table or hung over a chair in a public place. In parts of Miami people put bars on their windows and have a heavy gate on their doors for security.

Apart from the unlocked-bikes thing, it’s all more or less on par with how I see things… We’re lucky here, live it up, and spread the good stuff….

While it may not be perfect, we still are one of the best cities in the world! We are a unique city in that we are probably the only city in the world which can lay claim to creating its own sport, and thus the sporting heritage, devotion and stadiums are second to none! Our road network is one of the best and facilitates easy transport (at off-peak times!) We have a spirit for excellence seen in very few places around the world! Many of Australia’s most famous bands originated from here! Aussie TV originated and flourished here (originally the Sydney TV stations relied heavily on American shows, Melbourne developed its own, ie.IMT). Our history is pretty unique in that as a city we grew rapidly because of the Gold Rush, and overtook Sydney as the number 1 city despite its head start!
We are blessed in this city- we have our problems, but there’s nothing that can be overcome! And remember, as Gold FM and lots of other outlets remind us, we are the “world’s most livable city” (how long have we been trading under that gimmick?)!

You say that light the sporting culture is a good thing. AFL players are a bunch of thugs and rapists who are idolised by a large section of the public. There are violent incidents amongst spectators all the time. Junior competitions serve as an initiation into this culture, and provide an opportunity for parents to beat each other up in an environment where it’s acceptable. I wish football games would just go away.

Hey Vas, were you a bad athlete or something? By no means am I glorifying footabllers- many of them are buffoons! But our sporting culture shows we’re willing to have a go at anything! And the spirit of competition is what drives us to greater things- have a look at Greece right now to see what laziness and idleness gets a people!!

What violent incidents amongst AFL fans- have never heard or seen any violence among fans- for Heaven’s sake, opposing fans sit all together! This isn’t England!

I remember hearing about the ‘safety aspect of Japan years before I came here, and while things aren’t perfect (lots of in-family killings of late), I have never felt worried at anytime anywhere in the 10+ years I’ve lived here. This is so much the case, that I have to ‘security up’ when back in Aus – I can’t be as laissez-faire in my attitude to safety as I am in Japan. The key thing seems to be a collective community responsibility for ‘harmony’ – ‘wa’ as they call it. Now, people DO break the wa a lot here, but not in overtly and annoyingly aggressive ways I see in Australia. There’s no “I’m looking for a fight” mentality anywhere, even in the most ‘wild’ areas – in the heart of the endless drinking areas – or after such nights on the town – women have to take care of gropers on public transport at any time, but I’ve never seen or felt any tension on public transport in Japan, very different to how I have felt in my years growing up and living in Australia.
As for the plainclothes police in Melbourne handing out tickets for a variety of offences…where did that come from? The first time I’ve ever heard of this.
I also wonder about the ‘tourist effect’ – one’s perspectives as a tourist often involve a lot of rose-coloured observations based on a short stay in an exotic location. Still, after the pressures of Jo’burg (houses with razor wire and safe rooms to protect the family from intruders) Melbourne is going to look pretty nice.

So the best you can pull on me is a lame ad hominem attack Andrew? “Well you’re just jealous because you suck at sport.” Ignoring what I said altogether. Besides, I was captain of an moderately successful local indoor soccer team and competed in school weightlifting as a teenager. I’ve done martial arts on and off over the years. I’m still very strong and reasonably fit.

Victoria’s “sporting culture” has very little to do with having a go, or giving it a shot; it has a lot to do with men (and sometimes women) finding an excuse to get drunk, idolising thugs and behaving in ways that are generally considered inappropriate.

I just hate what big sports have become. I went to a few AFL games in Melbourne and I’d always end up sitting next to some racist. For example, they’d be yelling things like, “Go back to ya campfire, ya f..cking boong!” when indigenous players had the ball. The rugby league fans aren’t any better – I was at a Melbourne/Canterbury game and the guy next to me was yelling, “Bloody terrorist, get our your prayer mat!” and the like at Hazem El Masri. As to spectator violence, just look at the relevant Wikipedia page: a disproportionate number of the entries mention VFL/AFL.

OK, to me fair, I do know of one case where the AFL actually helps someone. I have a friend who’s a former alcoholic. He relapsed early this year, and his life deteriorated quickly. But he’s a hardcore Hawthorne fan, and a member of the official cheer squad. When the season started, he had to sober up because he couldn’t get to games or perform in his cheer squad capacity if he was constantly drunk. But that’s an exception.

Sorry, Vas, wasn’t trying to insult you, it just seemed you were somewhat bitter with regards to sport, and I made an off the cuff remark. As I said, a lot of these guys are morons, and they themselves don’t necessarily enjoy my respect, but the endeavour itself is what I admire, the enthusiasm that people share! Though it bugs me when that the ONLY thing they care about! With regards to AFL, I’ve had an on/off affair my whole life- there’ll be years that I’m sick of all the attention, then others when I’ll be into it! Besides, there are other endeavours where racism and booze combine with violence- clubbing is one such endeavour!

From the linked article: “There are only six noteworthy things to come out of Sydney. The six afternoon flights to Melbourne.”