From time to time people suggest that train lines should be built in the middle of all new freeways.

The problem with building train lines along freeways is you’d be in danger of them all ending up like Jacana or Kannanook.

Because freeways take up so much space, make so much noise, and generate so much pollution, any stations are likely to be a long way from houses, shops, or other places people can get to on foot, which is a necessity for making public transport work well.

If there’s nowhere to walk to from the station, you end up with people having to drive to the station (which means it’s a source for trips, but never a destination, and severely limits passenger numbers, since carparks fill rapidly), or you have to have very high quality feeder bus services (which can be done, but it’s not something often done very well in Melbourne, and it’s not letting the railway live up to its full potential). 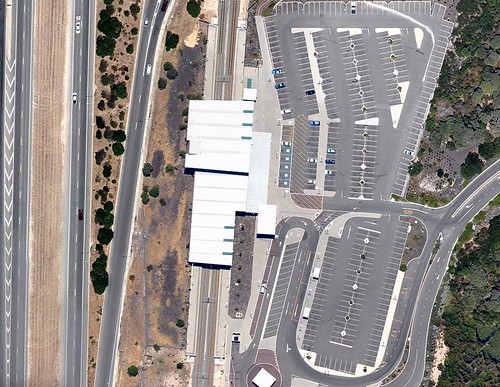 (Warnbro station in Perth — from Nearmap.com)

The same debate happens elsewhere, and with light rail:

It’s not just a question of distance, it’s also the environs: a station in the middle of lanes and lanes of traffic (and its noise) and huge carparks, reached via long pedestrian overpasses is just not a nice place to be.

It’s so much more pleasant if the station is integrated into the streetscape, with lots of other people around for passive protection, and attractions close by — in other words, stations in the middle of activity centres, as in most suburbs of Melbourne, with businesses and residents nearby. 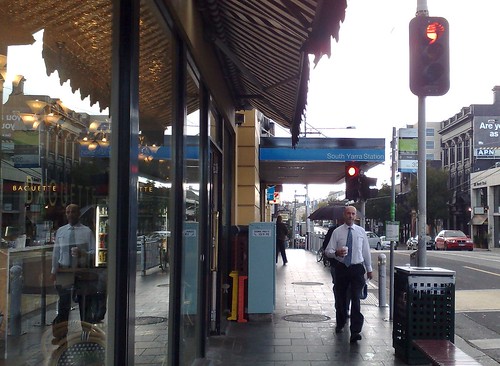 The buzzword for what’s needed is Transit-oriented development.

Which is not to say that railway lines shouldn’t be considered along some freeways. Perth has used it to rapidly and cost-effectively expand its railway network.

And in Melbourne a link from Victoria Park along the Eastern Freeway (which was specifically designed to cater for a rail line in the middle) to a Park+Ride/Bus station at Bulleen (eg the cheapest easiest bit of the long-proposed Doncaster rail line), with a nice bus interchange would allow all the freeway buses to be redeployed to provide frequent connecting services into the station, instead of being stuck in traffic on Hoddle Street and Victoria Parade.

But trains along freeways shouldn’t generally be the preference, if there are viable alternatives. There are usually better places to build them.

Additionally using Perth is a little hard given the constant development of their train system.

Should you put a set of train stations down the Eastern “Culvert” style freeway similar to the construction of the future Epping and South Morang Train Stations, the will constantly be full without a shadow of a doubt!

Yes, Perth’s past development kind of makes it necessary.

Define “full” though. My point is stations with only driving access and poor feeder buses will have full carparks and possibly full trains in the peak direction only. Off-peak and counter-peak services are likely to be almost empty, which is not making the best use of the investment, and is not providing an alternative to driving except for a lucky few.

I have always thought that a train along the ring road would be a good idea. This would be complimentary to the fact that most (all?) of the train lines in Metro Melbourne basically run radially to the city. So if you want to take a train from say Reservoir to Broadmeadows, you have to go all the way into the citya nd then back out again. I guess the answer currently is that you wouldn’t do it by train. But I have often wondered about the value of linking all the radial lines with some sort of ring line (along the ring road freeway) to enable better linkages between them.

Also trains under neighbourhoods are weird because your house could shake.

And it causes trafic congestion

Wow, have a look at how many Perth people have pools! (in Chelsworthgale’s link)

I used this station in Perth last year: http://upload.wikimedia.org/wikipedia/commons/f/fd/Transperth_Edgewater_Train_Station.jpg

It was during the peak hour and no dodgy sorts were around but with the only nearby surrounds being Bunnings Warehouse and the residential streets where people walk to the station from, it would have to be a truly awful place to be waiting on a cold evening for the infrequent late night train.

The main ones on the line have the street entry as an oversight which is clearly cos hardly anybody uses it!

The main Perth train line basically runs North-South (a couple of minor lines to the East and to Fremantle). There is a ‘Park and Ride’ at almost all stations and they would basically be full every day.

The greatest problem is that the Government has never gotten around to the other half of the job – East-West linkages by bus. It’s not even that they’re not frequent enough, they just don’t exist.

On the other hand, you’re a sardine all the way into the city from Mandurah (south) if you can get on a train at all. It’s no wonder people drive.

On the plus side, the Government is looking to build a TOD at Murdoch, based around the new tertiary hospital (http://www.planning.wa.gov.au/Plans+and+policies/Metropolitan+planning/Murdoch+activity+centre+structure+plan/default.aspx). They even have a TOD taskforce – http://www.planning.wa.gov.au/Plans+and+policies/Metropolitan+planning/Transit+oriented+development/default.aspx.

There are better places to put them…. if you can afford to put them underground, which costs up to a whopping 100 times more per km

You point out the problems but there are solutions to every one of them. Don’t be so negative and work out how to do it. It won’t happen in any other form, but on the other hand, it won’t happen in Vicotria because we don’t have a Government that can think laterally.

Express trains it’d work for. Or have something like o-bahn tracks with feeders into them from suburbs.