Isaac noticed the Best Before date on our current jar of Vegemite is MAR10. That makes it Mario Month this month! 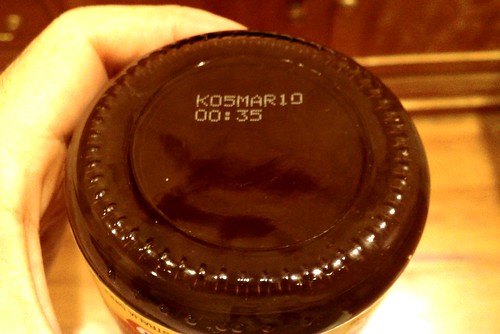 Then maybe I’ll make a Vegemite sandwich. (Though it doesn’t strictly have to be used by the end of the month; note the difference between “best before” and “use by”.)

Why is it Mario month? Kos ’tis!

Wouldn’t be too concerned about the BB date on Vegemite- it’s as tough as nails! Due to it’s high salt content, it usually lasts much longer than what is claimed! They usually give it 1 year from date of manufacture. I know this because I was responsible for running the production line which makes the Vegemite tubes! If you’ve ever seen those tubes, it is my company that manufactures them, as Kraft doesn’t have the facilities to make tubes! I work for a contract packager- we manufacture all sorts of products, from aerosol cans, bottles, tubes, toothpaste, sunscreen, Mylanta, Listerine, among others!

I’m not responsible for the Vegemite nowadays, as it is done on another line for convenience, but it is a pain in the rear end to clean! Personally I’ve never been able to stand the stuff, which probably made me ideal to make it, once I got used to the smell! In fact, I could be drenched with the smell, and I wouldn’t notice, as others would!

With regards to “Use By” and “Best Before”, you’ll find the UB is very rarely used nowadays, with manufacturers preferring BB so people can extend the use of the product as they see fit, and it let’s them off the hook legally! To decipher that code- not sure what the “K” means- might be something related to Kraft! The “05MAR10”, is the BB date-5/3/2010, and that indicates the date it was manufactured- going by what we do, it would be 1 year from date of manufacture, so it was filled on 5/3/2009. The time code at the bottom is the time that it was coded- 12:35AM- graveyard shift!

And you’ll love this Daniel, and it relates to your interpretation of the picture, and I’m not making this up! I took over and learned how to run that line from my uncle, who works on another line now. In fact, it was he who originally set up and ran the Vegemite tubes when they first came out! His name- Mario!!! I kid you not!!

I read somewhere that the “K” stand for “Kosher” and is only printed on there 6 months out of the year, making the product only Kosher for 6 months/12. Seems a bit weird, but who knows…

I’m terrible with Best Befores. If it doesn’t contain dairy or meat and there’s no mould, then it’s good by me. I only recently threw out a jar of jam with a best before of 2005…

Daniel, did you watch tonight’s ACA? They did a piece on the difference between use by and best before. They even used a jar of Vegemite to show it it was OK! As I said before, Vegemite lasts a long long time, as it is LOADED with salt, which keeps it preserved!!

I don’t watch ACA or Today Tonight. I know they occasionally have something worthwhile, but the trivial pap and the general low quality of the journalism is just too much to bear.