Seems some people can’t see the trees for the forest.

A HIGH school has banned bicycles because it has no bike shed and it doesn’t want to encourage students who refuse to wear helmets.

Hume Central Secondary College’s policy has puzzled health and cycling groups amid growing concern about childhood obesity.
…
In the same newsletter, she [Principal Bronwyn Meek] complained about the dangerous congestion caused by too many cars around afternoon pick-up time.

Meanwhile, a study by BusVic concluded that users of public transport get an average five times more walking time per day than those who use private transport.

And they looked at which areas of Melbourne have the lowest average minutes per day walking and cycling. Hardly surprising that it’s the areas which have the poorest public transport, where people are dependent on their cars for most trips. 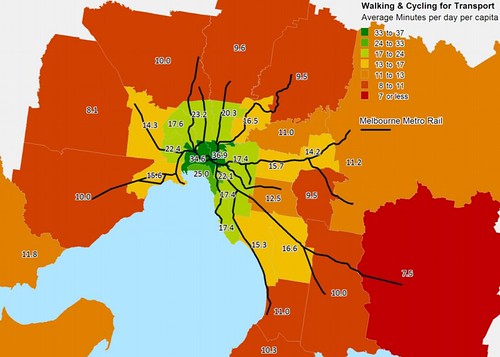 And people wonder why there’s an obesity crisis.

I may not always enjoy the walk to the station, but I know it’s good for me, and because it’s built into my daily routine, it always happens.

I’m just lucky I live in an area where I’ve got that choice.

My observation would be that if you have to walk 41 minutes to get to the bus stop, it is not a very useful service.

I doubt it’s luck that has you living near good PT. I live in an area with excellent PT because I chose to. It meant I couldn’t get a media room, 3 car garage or even a backyard but it did mean I can walk to the shops, know I can get a tram or train home and require only one car for the household. I don’t think it’s necessarily fair that people move into an area ill-suited for PT (eg many cul de sacs, low density) and then expect good PT to be provided and subsidized by those who chose to live in higher density with consequent lower costs of service provision. You can’t NIMBY about having apartment blocks near the station but then expect turn up and go services.
That school principal obviously never learnt to connect the dots…

I don’t think people are walking 40 minutes to the bus stop – there are other ways to get this statistic. For example, I walk six minutes to the station in the morning, catch a train to work, and then walk home for about thirty-seven minutes in the evening. I’d still consider myself a PT user. (In Melbourne, I’d walk to and from work – about forty-eight minutes each way – but I’m lazier now. I only use my car for shopping in Melbourne or visiting family scattered around Melbourne and Victoria.)

enno, it would be useless, but that’s not what it’s saying. The 41 minutes is an average total per day.

In my case, it’s roughly an 11 minute walk to the station, and about 5 minutes at the other end of my trip. 16 minutes each way = 32 minutes per day. Working in the CBD rather than some remote office park also means I’m more likely to do some walking at lunchtime (as well as any other walking that might take place such in the evening).

The Australian Government’s physical activity guidelines recommend that adults spend at least 30 minutes doing moderate-intensity physical activity on most (preferably all) days.
…
Therefore, it is likely that most regular public transport users get enough incidental exercise to maintain their general health, without needing to find additional time to exercise.

Dave, yes, that’s true, I chose my home location carefully. But the new estates being built are mostly not low density — take a look at Derrimut, for example, comparable to many well-established suburbs.

And places like Caroline Springs are dense enough to have traffic congestion. They could easily have decent PT along main roads. As I’ve noted before, decent PT is provided in some areas but not others due mostly to historical accident.

My kids have decided not to get their licence, they feel we are close enough to PT for them to manage. The youngest has just left for uni, she’s going to walk to the Hughesdale station as it’s the best line for her, she wait for the 767 bus and miss the train or she could take the 630 to Ormond Station. She’s choosing to walk. We made her take an hours walk most days until she started uni. Neither of my kids have excess weight, I wish I could say the same for me, I work at home and drive everywhere.

It would be nice to have a suburb-name overlay for the map, I *sort* of know where I am, but I’m not sure.

Yeah I use public transport to get to work so including walking to the station at each end that is 40 minutes a day.

I am a bit dubious about the 8 minutes a day for car users though.

The other point about people who “choose to live” in suburbs with good public transport, is that in many cases it is a very CBD-centric view. I guess in the very inner areas there is good transport in all directions. Move to a middle-distance suburb on a train line and you may have adequate public transport to the CBD but getting anywhere which is not on that one-dimensional line can be a real hassle if it is possible at all.

And the other point is, people can choose to live in a suburb with good public transport ( assuming they can afford it ), and then their job gets changed and they need to get to some place which is remote or impractical to get to.

Glad you brought up this topic Daniel – I reckon walking to the station is wot keeps me “healthy”.
Oddly enough, the fact I’m using Myki on the train means I walk even more. In the city I walk around now instead of catching trams (I’m too tight-ar$ed to pay for a second ticket).

enno – good point about the job locations. It’s why the Govt/Councils should be encouraging job growth on transit corridors, not in “office parks” far from good PT options or that force tortuous bus routes. (see “Be on the way” for a quick explanation)

And Daniel, from a quick look at that Derrimut link, while there’s a nice central road (Windsor Blvd) that catches most houses (ie is <400m from most) they mostly look like detached from the rooves – would have been nice to see at least a few townhouse/villa/apts along there. I do note there's some in the NW corner, maybe that's enough…? The planned Canberra suburb of Molongo at least seems to get some of the higher density on main/bus roads & near shops / lower density in the side roads balance better.

Anyway, back on topic: I managed to avoid my normal walk home from the station thanks to some quick iPhone Metlink and TramTracker advice (train to further away station, but connecting to tram to front door…) ahh technology, here to save us from exerting ourselves….

Tangent: Looking forward to a blog entry on this article/report, especially the reasons given for fare evasion:
http://www.theage.com.au/national/ticket-inspectors-rated-as-less-than-fare-20100312-q48h.html

My brothers school has no bike shed so they banned bikes. People could ride there bikes to school but someone has to take it home.

I luv walking to the station

Tony, yeah I have read the full report, and will post something on it in the next couple of days.

Good point raised by “enno”: I know a couple of people this has happened to. At least one of the culprits did the right thing and offered redundancy to those not wanting to work at the new location (Cranbourne, Outer Space 3977).

I say “Aus. Govt”: this is no mistake – I want them to #DumpTheStates.

All, I don’t think Daniel is talking about living 41 minutes away from the station.

The 3m transfer is that long coz it’s a bit awkward at Nunawading at present, but they’re going to move the bus stop across the road, which will make it better.

I work in a position in local government in encouraging schools to promote active travel like, walking, riding, scooting and public transport to school. I have done this for about five years now. This position will end at the end of the year as this local government area changes focus away from direct active travel projects to a more broader systematic approach. It is my belief this approach will not be a grass roots one, but a overall policy direction that will spruik the same information without a hands on approach in the community. Programs like Ride2School through Bicycle Victoria strongly encourage and try to educate school communities to use active travel. R2S works best with local govt support also. To increase physical activity, reduce traffic congestion and its associated climate issues. We know incidental activity is a great way to get everyone moving, like the walk to the bus or train stop.

I think its important for local government to maintain a commitment in the long term to promote, encourage and be a role model for active travel. Unfortunately, schools get targeted because they create a mass amount of travel of cars that do short trips under 2-3kms. If we could get at least 70% of trips to school being active travel, this would make a huge difference to the morning and afternoon rush, plus reduce those potential near missus due to less traffic.

Banishing bikes from schools, this is ridiculous, take away a child`s right to ride or a right to park their bike! See Ride2School they provide Bike Shed funding! or hold a fete and raise the funds. I know a school that does not allow scooting because its dangerous!

I think all Councils should have a commitment to increasing active travel and improving safety for all pedestrians and publish their travel behaviour.

I feel its a shame that grass roots programs that target specific groups like schools with active travel are not sustaining themeselves in local government because they cost too much to employ someone to actually work with schools and the wider community.