For a while now, VicRoads has been working on a plan to allocate different priorities to different roads around Melbourne. Rather than the free-for-all we sometimes see now, some roads would be setup to emphasise pedestrian priority, some bus, some tram, and some would be “preferred traffic routes” and lesser “other traffic routes”.

I suspect it was inevitable that this would be launched under the title “SmartRoads“.

One of the positives is to encourage through-vehicle-traffic onto particular roads and off others, and with my sustainable transport hat on, hopefully it means better pedestrian facilities (eg crossings and low traffic speeds) and priority for public transport vehicles where it counts.

The detail about where the principal bike routes will be isn’t clear yet, and of course for cycling to really take off, these preferred routes need to be much more closely spaced than they are for cars. 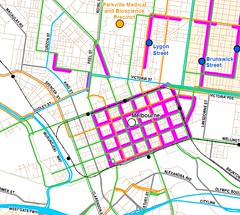 The down side of the plan is that if you live on a road which is deemed to be a preferred traffic route, you’re probably going to see more traffic coming through. But then, it does seem to formalise trends which have been ongoing for some time now, so you may not notice a huge difference. It’s been obvious for some time now that the Nepean Highway and Punt Road are traffic sewers.

One of the big questions will be what happens when two priority routes intersect? Anybody who’s caught a tram that crosses Alexandra Parade, for instance, will know you can spend minutes waiting at the lights. Hopefully the view that the higher priority is the number of people moving through the intersection, not the number of vehicles, will be the prevailing one.

I saw a draft of this thing in 2008; things have changed a little bit since then. In my area (which is still under review), happily, there are no preferred traffic routes, though there are some “other traffic routes”.

I think this is a step forward; recognition that the car is no longer king, at least not on every single road, and that more efficient movement of people means giving priority to trams and buses, as well as pedestrians in some areas.

But the devil will be in the detail — and to take full advantage of it and really cut traffic congestion, the government needs to push much harder on upgrading the alternatives to car travel.

How will it affect your area? Download the maps from VicRoads.

If it is anything different to what they are doing now, it looks like a scam. Priority for different types of transport at different times of the day ? Is that any smarter than the existing clearway schemes ?

Or do the cyclists get the road between 5 and 6 AM, then the buses for an hour, then the cars get a go ? Of course, thats silly, but then what exactly do they have in mind ?

We have been aware of this..but there is still the remarkable contradiction that whereas Bridge rd is supposedly a designated pedestrian and PT priority: i assume that will mean wider footpaths and DDA super stops outside Epworth Hospital etc, and that only 750 cars/hr use Bridge Rd, why the F&^%K are they intending to implement clearways:

In the case of St Greoges Rd, which runs into Brunswick st( that isn’t a clearway) and where they want to build a community library/ schools/village etc..why again are they wanting to implement extended clearways! BTW the tram along St Georges rd is the MOST dependable at 89.9%.

The problem is that clearways should have been implemented as part of an overall Urban development Plan- that incorporates as many of the issues as possible in a cooperative sense. What has transpired has been a disaster! And someone should be sacked!

I see a lot of issues around the preferred (road) traffic routes and pedestrian amenity, especially where major roads interrupt station pedsheds and reduce the 10 minute pedshed from nearly 1km (as it should be) to just a few hundred metres.

For example Nepean Hwy Moorabbin or Dandenong Rd East Malvern. While these roads are unquestionably major car traffic routes, why should it take longer for a pedestrian to go a few metres (to cross a road) than a car to go 1km, when the limitation is not speed but traffic signal policy?

Major roads can remain major roads, but they should not be exempt from pedestrian access improvements near station pedsheds. In addition all bus stops should have crossing facilities by right (a suitable refuge is often sufficient) and removing buses from major roads ought not to be considered a solution to increase this proportion.

ahh..i’m so mad i could scream

If you go to the Stonnington map..you can see the problem- traffic needs to get from the freeway to Stkilda/ South Melb etc and the only routes are through the activity centres along High st and Toorak rd. This was apparent at this weeks demos: the traffic volumes when sky high the minute the clearway was opened on Wednesday!

The issue for PT is that this increase in volume will frustrate tram travel times rather than assist .

It is a huge mess.

Clearways are a symptom of poor public transport planning and are a poor outcome for social space.

Herschel – “traffic needs to get from the freeway to Stkilda/ South Melb etc”.

Does it really *need* to, or is that just the sort of thinking that has flooded our inner suburbs with traffic from freeways?

If traffic needs to get from the freeway to St Kilda/South Melb, particularly the latter, it should be on the toll road, and through the tunnel, and then via Kingsway to where it’s going, bypassing the activity centres such as High Street and Toorak Road completely.

Perhaps the answer is such measures as traffic light sequences at Toorak Rd/Glenferrie and other intersections that are very unfavourable to westbound traffic. Let them queue a few times and they’ll learn to find another way.

The thing that bothers me with the idea of different uses at different times, is that it is simply impossible to segregate traffic demands by time.
What I am suspicious of, is that adopting this plan will lead to outrageous new rules. For example, turning off all signalised pedestrian crossings on some main roads between 7 and 9 AM, because the cars have priority then.

What a ludicrous suggestion.

I think what Enno was saying is that it is ludicrous, but then Govt departments have a nasty habit of making ludicrous into reality.

Example: the ban in 1998 (since overturned) on statistics on school/student performance – schools need this info to address problems.

Example 2: letting anybody that feels like it call themselves an Aboriginal.

Example 3: Charging detention fees to illegal immigrants (a huge failure, as predicted, and something they don’t do to real criminals).

Well I agree its “ludicrous”, but what is this plan all about really ? Do they think they can manage the demand for trucks, cars, public transport and pedestrians at different times of the day ?? How would that work, exactly?

There is already a road hierarchy of freeways, highways, arterial roads, back streets, and so on. Are they going to re-invent this in some “smart” way that nobody has thought of yet ?

Ideas like clearways during peak hour through shopping streets on main roads, different road tolling, these are neither new nor smart ideas. Indeed they are becoming less smart, for example as clearway rules are being made more uniform between different places, in spite of the obvious fact that not all places have peak hours at exactly the same time or in the same way.

Given their track record, I don’t think it is ludicrous to be suspicious of the State road authorities and their shady links with dodgy financiers and dodgy construction companies. An announcement that they are going to “manage” demands for road space looks deeply suspicious to me. Since the well-connected large transport companies will never wear restrictions aimed at keeping them out of peak hour traffic, I strongly suspect this is a plan to squeeze more cars onto the existing roads, by a more extensive clearway system and measures hostile to pedestrians and cyclists.

Herschel sent me a correction to one of his comments above:

hi Daniel, On your blog i referred to diverting traffic from the M1 along High St.. That was a mistake. The only turn offs are Warrigal Rd, Burke rd, Toorak Rd , Burnely. I stand corrected. High St does not have a north bound turn off.