An update on my ISP shopping post from a couple of weeks ago:

Netspace rang me up to discuss my concerns (they found the post themselves), and to let me know there was some progress on resolving them:

Advice of network outages — they said there is already a project underway to advise of outages via SMS direct to customers. Sounds pretty good. Whether or not they’d open up their network status page was unclear — sounds like not. But at least SMS alerts would make it easy to know what’s going on without being online.

Revision of plans without telling anybody — apparently this is being discussed with Netspace management, and it is recognised that this isn’t great customer service. No promises, but at least they’re looking at it.

And they said that they recognised I was a loyal customer (since about 2003 I think), and wanted to keep me, and made me a very good offer to upgrade me. Combined with the fact that there’d be no hassles with switching ISPs, and no outage, it was an offer to good to refuse.

So far it’s been good, the speed difference is noticeable. In fact, they switched me to the faster speed before the modem arrived, so almost instantly my speed went up from 1500 kbps to about 8000 kbps (the fastest possible ADSL1 speed). And the ADSL2+ speed is about double that. 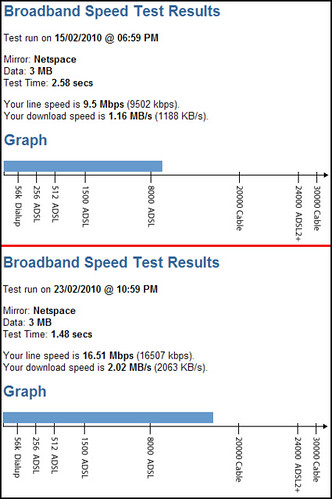 And of course because there’s no contract, I can jump ship anytime if I want (though in the fine print there is a $65 “network termination fee”). But for now, I’m happy again, and provided Netspace are true to their word and fix the outage notifications, I’m more than happy to recommend them.

Another lesson here: I’m not sure if this is universal, but it would seem that people on ADSL1, using ADSL1 modems, are able to get a speed upgrade from 1500 kbps to 8000 kbps fairly painlessly just by switching to an ADSL2+ plan. Because for many ISPs, ADSL1 uses others’ facilities (eg it’s reselling) and ADSL uses their own, the pricing is likely to be comparable — in my case it was identical. In fact, why Netspace (and other ISPs) don’t encourage this?

I am just whinging out loud that I am connected to an exchange which isn’t the closest for some reason, and so even on ADSL2+ I only get about 3.5Mb.

Also, for what it’s worth, I have only ever known iiNet to increase speed and monthly quota (always with notice), but never any other aspect of a plan. So I know one chap on what they call a “grandfathered plan” from about 5 years ago. It was just as they brought in VOIP, so they bundled it free. It’s not free on current plans, so he is getting a good deal, all with current speed and quota.

That is impressive. I just checked my cable speed at the same site at 11.00am and all I get is a line speed of 5535 kbps and 692kbps download. I can pay more for a faster connection. I will check again at a quieter time.

Be careful what you wish for about Network Status updates. iiNet brought those in many many years ago. You’d get bombarded with everything from scheduled outages on the Upper Gumbucta exchange from 12am to 3am on the Tuesday morning in a week and a half, to notification that their service desk was getting busy tones for five minutes an hour ago. However, when the service went splat, nada.

As with all network outages, by the time the propeller heads know what is going on, and could theoretically tell you what was wrong, they are already twenty seconds away from fixing it, so there’s really no point. It’s one of those things.

IMHO all you can really do during outages is have a cup of tea, a bex, and a good lie down.

PS: Not everyone can get 8000. Not by a long shot. You only get 8000 if you have a nice run of cable between your home and the telephone exchange less than a kilometre long. As you ramp up the distance from 1km to 5km,. the downstream sync speed gradually goes down from 8000ish to 2000ish.

Melbourne is actually a good place to be in this respect. There are comparatively many exchanges per head of population throughout the inner and middle suburbs compared to places like Sydney or Perth. That made it harder for ISPs like iiNet to justify citywide rollouts in Melbourne until after they had completed their rollouts in the cities with more potential customers per hundred grand (or thereabouts) of capex at each exchange. As such, cable distances in Melbourne are among the best in the nation overall.

Even though I have an IT degree, I have a dumb question (don’t laugh):
What are you using to measure your speed? I am also on ADSL2+ with Netspace and I am curious…

Thanks PC, very interesting about distances. But even 2000 is better than 1500, and presumably would be cheaper/more profitable for the ISP involved if they switched you to their own DSLAM rather than the upstream provider’s.

Didn’t know about the number of exchanges thing. Probably explains why it took the ISPs so long to install DSLAMS at Bentleigh (and some still don’t have them there).

Yeah take your point about over-enthusiastic alert systems. The web hosting company I sometimes use, AussieHQ, once reported via RSS that their phone system hold music wasn’t working.

Liz, it’s not a dumb question, as I forgot to put in a link to the speed test site. It’s here: http://ozspeedtest.com/