During the school holidays, the kids and I will often leave the car at home head out to not just attractions in the CBD, but also to parts of the city we might not normally get to. Partly for the joy of exploration, but also partly because Jeremy is keen on hunting down secondhand video games, so we’re gradually ticking off visits to the various branches of Cash Converters around the place. (Though new discovery GameTrader is also worth exploring.) 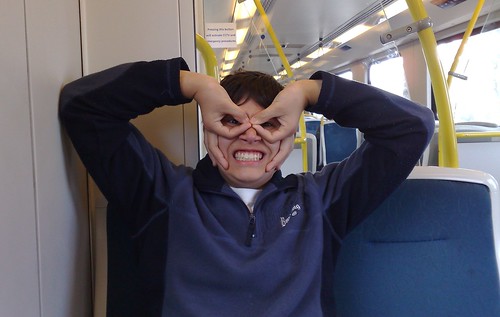 We can get around fairly easily with PT on weekdays, as the network in my neck of the woods hangs together quite well for spontaneous travel because many of the main routes run every 15 minutes or better.

Even the government has figured out that this is appealing to people:

“This high-frequency bus service, with a bus arriving every 15 minutes during peak periods, is a viable alternative to the car.”
…
“In just a few months of service, we have already seen a 37 per cent increase in weekday usage along this route. That makes this SmartBus service the most popular bus route in Melbourne,” she [then-Minister Kosky] said. — Government press release, July 2009.

The problem is that the network of frequent services only serves some suburbs, and it really only applies on weekdays, which unfortunately is when white-collar workers like me are least likely to be wanting to go anywhere other than work.

Is every fifteen minutes perfect? Hell no. I think at least every ten minutes should be the target, but the key is that it applies all of the week, to all main routes, so you can get from anywhere to anywhere at (almost) anytime with a minimum of waiting. 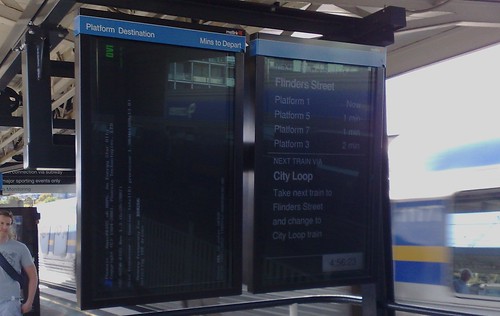 So anyway, during the holidays just gone we headed to Northcote, where we found no good games, but I did get a couple of cheap CDs.

Another trip was to Frankston, where no games or CDs were found, but we had a nice lunch (this time avoiding the “I’m amazed they don’t get sued” Hungry Zak’s which we’d tried the previous time… a bit horrible). And as a bonus, within minutes of arriving I saw a guy try and swipe a can of drink from a shop, only to be chased and caught by the shopkeeper — classy, Frankston, classy.

On these and other recent excursions, we didn’t have to wait more than a few minutes to hop on trains, trams and buses. When it all works, it’s a very relaxing way to get around, and I get to talk to the kids way more than when I’m concentrating on the road. (Not to mention a quick trip down to Frankston for $2.02 full fare/$1.01 concession using a Myki or 10×2 hour Metcard is a flippin’ bargain.)

I’m more inclined to use PT for these kinds of trips for a number of reasons, but one I consider very important is that I’m getting my kids acclimatised to the world around them. I’m making sure they know how to get themselves out and about (not just on PT, but as a pedestrian too) so that at the point they’re old enough to (which isn’t far off), they can do it with ease. You just don’t learn any street smarts being chauffered around.

6 replies on “The fifteen minute network”

I love catching trams because they come regularly. I live on the Upfield line and gave up catching the train over a year ago. In peak times the service runs every 20 minutes, which goes out to half an hour in non peak times. It’s just too far between trains, especially if one gets cancelled or they decide to shorten the train to 3 carriages and you can’t get on!

Gosh I lived along the Upfield line in Coburg, when I was a kid and I remember the train running every 20 mins then!! If one went past we were able to walk to the station and get the next one and still make it, Sydney road is a shocker for trams , still is and there are more cars ! Its not wide enough to squeeze through when moving.
Also the trains on the upfield line would not run past our place on Sundays or after 7.20pm on weeknights, imagine the horror of that today and they still cant run them every 10 to 15 mins.

It’s not entirely 20 minutely in peak hour – there’s one gap of just 18 minutes in the afternoon :P

That comment about Frankston sounds so, so typical of the place! But they are introducing new smoking bans unheard of elsewhere in Franga, you can’t say the place is all that bad.

The Upfield line didn’t use to have trains running on it on a Sunday.

There was also a plan to shut down the line in the late 1980’s turn it into light rail and shut down the Sydney Road Tram altogether.

Oh I could tell you a story or two……. *rambles on*

I we also leave the car at home and go on a bus to Epping Plaza.