Work has moved me to the west end of the city, and apart from needing to figure out where there’s a decent newsagency and ATM, I’m also figuring out the transport links.

Flagstaff station is the closest. Easy. Well, until they go ahead with that plan to move Frankston trains out of the loop, which is not a bad idea in and of itself, but it’ll mean a little extra hassle.

But within the CBD, and to the surrounding areas?

The train is an option for some trips, but not for others — and it depends on what time of day it is. Thanks to the enormously confusing lunchtime loop reversal, you can get to Southern Cross and Flinders Street before about 12:45, but not after that, at least not directly. You can get back to Flagstaff from those spots at any time however as the Clifton Hill loop runs clockwise all day on weekdays. 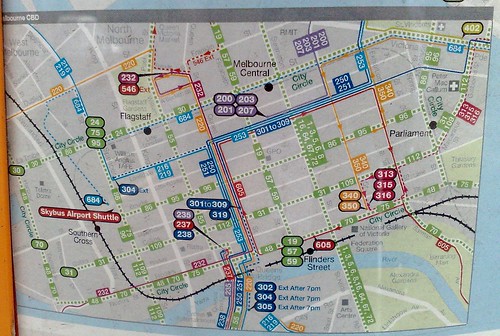 Trams along Latrobe Street are the City Circle and the 30. The former is packed with tourists, and invisible to TramTracker, the latter doesn’t run outside business hours.

The William Street tram is also nearby. The catch with this one is it’s the worst tram street in the CBD. One route, only every 12 minutes in off-peak hours.

Nearby is Lonsdale Street, which is home to many buses. Of course these are impenetrable to many people, because you can’t just follow the tracks, and they have a confusing route structure.

In recent years they’ve rejigged them somewhat, concentrating most routes along Lonsdale Street and Queen Street. In fact they’ve built a bus turnaround thing at the western end of Lonsdale Street, which looks a tad bizarre until you figure out what it does; not to mention it seems only one route uses it right now.

However an overview of where all the buses go isn’t particularly easy to find. The best map to explain it is on some of the bus stops (see above), but nowhere to be found on the Metlink web site. (Mind you, it doesn’t have the change to tram 48 that moved it into Collins Street last year.)

And despite its presence on the map, one can safely ignore the 684 bus, which is actually a service to Eildon which runs once a day, and stops only at Southern Cross Station, St Vincents Hospital, then not again until Ringwood.

7 replies on “Transport in the west end”

I’m sorry you lost me at “the information isn’t particularly easy to find” and I just drove my car or caught a taxi (waving at them when the light isn’t on…. or off). Too confusing for this slow traveller.

Yeah, I agree with Brian! I’m lost!
PS A spy tells me that someone matching your description got into a car on South Road near BB station late this afternoon. Anyone you know??

That was kind of badly worded. Revised.

Your spy is well informed.

What are they Frankston trains out of the loop? Surely the better City Centre (sorry “CBD”!) penetration you have the btter? And with two tracks each way on the loop, surely it can’t be a capacity issue?

It is a capacity issue. There are four tracks in the Loop, but most of the 15 lines converge there. The overground tracks into Southern Cross Station and Flinders Street have a lot of spare capacity.

See this old post for a bunch of detail on this.

And also this one about the impact of taking trains out of the loop.

Was pleased to see that new Transport Minister Pakula catches the Frankston train home from Parliament (despite getting a ride home from Cheltenham). Considering the regular crowding by Parliament, I’m so glad I now get on at Southern Cross. Although I’d prefer he came from a station between Cheltenham and Caulfield to see the true chaos we experience.

I think that map is wrong about the Lonsdale St buses. Ventura’s site tells me 301 and 305 also go there at least.

Yet some of them still go to the Queen/Collins terminus – why the confusion?