DFO has moved from Spencer Street to South Wharf. Oh, well done fellas — a move from an easy-to-get-to spot, to some godforsaken new place which nobody can find.

Apparently they weren’t happy with their high-profile location, being next to a major railway station. For motorists they also had a big car park underneath (though why the government actually allowed a huge inner-city railway station to have a big car park as part of the development, I really don’t know). 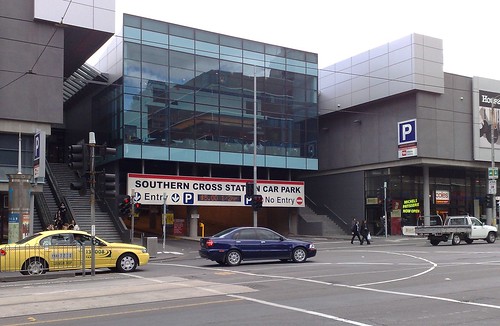 So anyway, where exactly is South Wharf? Down on the south side of the river, next to that delightful blight on the landscape, the M1/Montague Street interchange, and a good ten minute walk from the nearest tram stop.

For those driving, why would you bother fighting your way through the inner-city freeway traffic to get to the same old stuff provided at suburban centres?

I haven’t been past to look and see if something’s replaced the ex-DFO site at Spencer Street or if it’s a big empty void. (Update: Commenters report that most of the DFO branding is gone, but the shops themselves are still there.)

But I love the way the DFO map looks, with Essendon somehow being SW of South Wharf, and Moorabbin being out in Gippsland somewhere.

Thought the EXACT same thing on the day I was going to PT into there one lunchbreak to look at Good Guys for a Chrissy present. Funnily enough, ended up buying online.

its a hideous building, attrociously designed with nothing in the way of aesthetic appeal.
Hope it gets pulled down, sooner rather than later.

So what’s now in the Spencer St space?

I was at the Southern Cross one last week… its still there and there are no signs of it closing. It looks like it is just another DFO =S

This evening it had a big sign ‘Spencer St’. This is right over the newish Metlink/Viclink ‘Southern Cross Station’ sign.

Yeah, it certainly hasn’t moved. The Spencer Street site still has a whole bunch of clothes and stuff, just like it always has been. There’s still DFO branding all around it.

I’ve got no idea what their plan is.

I think there’s a JB Hi-Fi in there amongst DFO. Bit of a strange place for a shopping complex. Maybe they want everyone to arrive by boat. Or bike. The Capital City trail runs right through it now.

As far as I can tell the location in Southern Cross is not closing. The new location does have some newer and much larger stores such as JB Hi Fi, The Good Guys appliance store (or something similar, I can’t remember the name for sure), and I think a Katmandu store complete with a rock climbing thing in the entrance. The food court does seem to be smaller with fewer choices. The location is indeed a bit out of the way and most people who are not driving would not be likely to come across it on foot unless they had directions and planned to visit.

I was in there a few weeks ago and it is still a factory outlet, just not branded DFO (although there is still the odd DFO sign iniside) The signs on the Bourke Street Bridge simply say ” Spencer Street”.

Well this explains it! I got lost on a bike ride on the weekend, and as I was riding along what I thought was south wharf and saw DFO signs I assumed I was still near southern cross. Then I thought there must be TWO DFOs just really close together.

What GFC? How could we need MORE shops!!!!

Not a fan of DFO’s in particular but tagged along with friends a weekend ago and was very underwhelmed at South Wharf. First off, it is confusing to find then navigate if you are not familiar with the layout, it lacked any atmosphere and those shops that were open were just the same old blah, blah, blah. Would not be bothered going back.

And you need a PhD to navigate the M1 now.