Let’s just be absolutely clear about this: IT DOES NOT APPLY TO TRAINS. 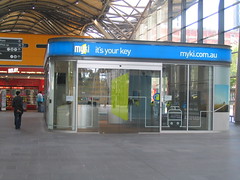 It’s only an issue for trams and buses.

Let’s say you have a ticket that runs out at 2pm. You get to the station at 1:50pm, hoping to catch the 1:55pm train. You validate and go onto the platform. Whether the train is on time, late or cancelled, it doesn’t matter how long you wait nor how long it takes to complete your trip, because you validated before the 2pm expiry. It’s the same under Metcard and Myki.

It’s different on trams and buses, because you validate/touch-on as you board. Under Metcard, if the tram/bus is late or cancelled and you end up travelling after the ticket expiry time, you’re still allowed to travel. For instance the bus driver can look at your ticket expiry time and wave you aboard — though whether most people realise this is another matter. (See other obscure ticketing rules.)

But with Myki you’re meant to touch-on your ticket as you board, so it’ll automatically realise your 2-hour fare has expired and deduct another one.

Of course, if you were paying for the whole day (or a longer period) anyway, it doesn’t matter.

Perhaps the people most impacted are those low-income passengers who are watching their pennies and are trying to complete, say, a run to the shops or library or dare I say it, Centrelink, within the 2-hour period, and really don’t want to have to pay another fare if their bus/tram back home is late.

Oh, besides that issue, people seem to be getting terribly confused about weekend travel on weekly/monthly/yearly tickets too. Some seem to think they won’t be valid at all on the weekend, and are demanding the price drop by 2/7. No. What’s disappearing is the bonus zone benefit (whereby weekly and longer Metcards are currently valid on both Melbourne zones on Saturdays and Sundays), not the weekend travel itself.

Perhaps it all goes to show that while a lot of the detail has been published (eg in the Myki Fares and Ticketing Manual), the information that’s out there in digestible form just isn’t very good.

People are crying out for information, and despite the Myki Mates being out and about, they’re not finding it, and assuming the worst.

UPDATE: A new Q+A from the PTUA web site, an effort to answer some of these basic questions people are asking.

I specifically remember that the government recanted on removing the two zone weekend bonus for weekend travellers (they were going to remove it, and then they decided no they wouldn’t). Was that only for metcard?

I do note with some amusement that there are no Myki Mates in Degraves subway this morning. Or at least their weren’t when I went through. Perhaps someone finally realised that they are basically useless until the card is publically available. The only question most people are asking is “when can I get one”. We asked a Myki mate that at the weekend, and they replied that it’ll be when the Minister announces it’s available.

It’s painfully obvious that Kosky and co are doing everything they possible can to avoid damage and fallout from what may well be a horrendous rollout. They won’t want to wait to much longer, because every second brings us closer to the election. They’d want to hope Myki is up and running and all the teething problems are forgotten by then.

I really don’t understand why they don’t let those that want one, have one, now. If it works, they have nothing to worry about, and techy evangelists like me will tell everyone how great it is.

Or maybe it’s not, and the naysayers are right and it will be the biggest public transport disaster in Victoria/nay Australia’s history. I tend to think it will be somewhere in the middle.

BTW Daniel have you seen Waters of Mars yet? AWESOME.

Yeah Nathan, they wanted to remove it earlier as they knew it wouldn’t apply under Myki. They backed-down and kept it on under Metcard.

Yesterday morning the Degraves St subway Myki Mates were taking a break, drinking a coffee nearby. (Fair enough, they can’t stand there all day every day with no breaks.)

Either staff or a person of influence :-P was trying to touch on his Myki Card on a tram. It wasn’t working but unfortunately he was standing on the tram step and so preventing the door from closing and the tram moving.

Looks like the people over at Myki decided to do some mythbusting. See http://www.myki.com.au which now contains a “MESSAGE FOR PASS HOLDERS ABOUT WEEKEND TRAVEL WITH MYKI PASS”.

[…] This post was mentioned on Twitter by Daniel Bowen and Daniel Bowen, Steve Davidson. Steve Davidson said: RT @danielbowen: Your periodical ticket will still be valid on weekends under #Myki, just not in zones you didn't pay for http://tr.im/FasK […]

My main gripe is having to pay for the Myki card. (I’m not charged for my Medicare, ATM, VISA card, etc.)

(Also curious about what alternatives will exist for tourists and other short-term visitors. $9.80 + ticket costs seems rather rip-offish.)

Michael Green: When myki was rolled out in regional cities the cards were sold at face value (i.e no surcharge). Same will probably happen here if you buy it online.

Short trip tickets like the 2hr and daily metcards exist – http://en.wikipedia.org/wiki/File:Myki_Short_Term_Front.jpg . They cost 10% more than the Myki card fare.

Maybe I should apply to become a Myki mate. Oh the horror.

Another problem that I have seen in Geelong, is that even if your card has less than the minimum value for a 2-hour bus ticket bus ticket ($0.90 concession), the card will let you scan on and deduct the fare, and your Myki goes in to the negative.

This is all fine if you’re using just one service, BUT, when your Myki is in the negative, it no longer lets you scan on to another bus even within the 2 hours, even though you’ve technically already paid for a 2-hour bus ticket.

It should let you on to any other bus for the next 2 hours because it already has deducted the fare for a 2-hour ticket, but it doesn’t. Instead it forces you to shell out for another 2-hour ticket.

Either it should let you use the ticket that you paid for, or it shouldn’t let you scan on if you don’t have enough Myki money to cover the minimum ticket.

What if you have a 2hr that expires at 4pm, and your train is due to arrive at destination at 3.45pm. However, if it is delayed by 20 mins, you will scan out of your destination station at 4.05pm, which would push you over the 2hr limited. Would myki then charge you for whole day?

Its very difficult to find any information regarding actual fare costs on the myki website http://www.myki.com.au. I have found fare information for Geelong and Latrobe Valley buried in the “Using Myki” section, but there is no specific link to “fares” from the menu. There doesn’t seem to be any info on this website about what the melbourne fares will be. Given that the system is supposed to be switched on by the end of the year, it would be nice to have some information.

jon, the consolation here is my understanding is when you topup with the bus driver, your existing 2-hours is reactivated, so you’re not paying twice.

Altissima, see the new Myki Q+A on the PTUA site.

From the Myki Q+A on the PTUA site: “If you were paying for travel all day anyway, then it will make no difference to you, but if you were trying to make a couple of short trips in a single 2-hour period, with no other travel that day, you will have to pay again if the bus or tram arrives late, after your 2-hours has expired.”

So passengers can end up paying more for trains that run late?

Altissima, you taking the mickey? It clearly says trams and buses only, and I already said the same thing here.

Ah, I did not know that.

Makes little sense though… why force people to have a positive balance, in order to fully use a ticket they’ve paid for (or at least are indebted to pay for) and are entitled to. Especially seeing as everyone has to pay $10 for the card, to cover instances like these of going into the negative.

Oops, Not intending to take the mickey (or indeed Myki!), just not reading very carefully.
I still can’t find any clear explanation of what would happen if you have caught a tram to the station, and then your train is delayed, pushing you past the 2 hour limit. You have to scan out of the destination station, do you not? and this would register either within or without 2 hrs limit. Would it not then charge me for a whole day’s travel, if the period is more than 2 hours from the first scan to the final?

See the question “Do I get charged for another 2-hours if I touch-off after the expiry time?”

Daniel, you’re still not answering Altissima’s question (and neither is the Myki Q&A section).

Sorry, I thought I’d answered it. Unless I’m misinterpreting, Altissima is asking what happens if you’re at the station and your train is delayed, so your trip goes past the expiry time. This is answered on the web page: Just as now, you get charged according to what time you entered the paid area (platform), not what time you board the train or get off the train – even if you touch-off the Myki after the expiry time, it’s all based on what time you started that leg of the trip.

By the way, the Myki people have finally updated their web site with some useful information, including a Q+A section.