The numbers were Levi’s product codes. The first digit 5 signified they were for adult men’s — my recollection is that the “student” (kids/young men up to a size 81 cm/32″) sizes in red tabs were 855.

We didn’t stock women’s jeans, but they seemed to be all numbered in the 700s.

And while the sizing was multiples of inches, like most things in the trouser-world (in Australia at least), it was measured in centimetres. 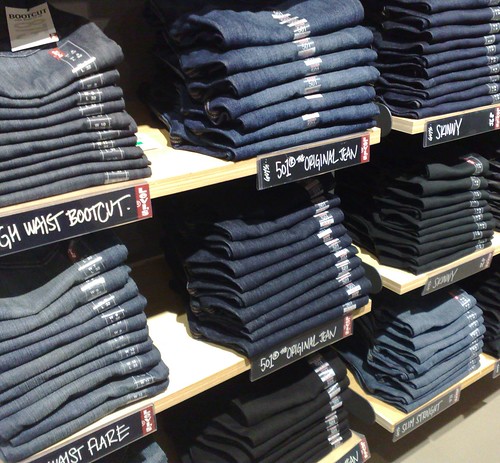 At some stage in the last couple of decades, the product codes have become marketing tools. 501s in particular have been catapulted into a fully-fledged brand of their own. They used to be a specific type of button-fly men’s jeans; now they seem to be a catch-all for anything Levi’s feels like calling “501s” for marketing purposes, not to mention thrown onto promotional T-shirts and hoodies.

I think the women’s equivalent used to be 701s, but now they too go by the 501 branding, as I noted recently when Marita was out jeans-shopping.

They’ve also reverted the measurements from centimetres to those archaic inches, to give themselves some genuine American-ness. At least, I assume that’s the reason, as everybody else has switched to metric — well, apart from Burma and Liberia.

This page doesn’t claim to be authoritative, but talks about the numbering of Levi’s jeans — in particular it seems to be a list from after some of the numbers got mixed up a bit. I know I have two pairs of 504s (bought at Hattams in the last couple of years) which that list reckons are “slouch straight for women”, which I’d dispute.

Presumably internally Levi’s now have a completely different numbering system, so they can tell all the myriad of “501” products apart.

4 replies on “The number became a brand”

All I know is I get confused when I see all those numbers. I just recently bought a couple of pair in San Francisco, 501’s with button fly and the right leg length (don’t think you get a choice of leg length in Australia?), best fitting and most comfortable jeans I’ve ever had. Ashamed to admit that I’ve never had a pair of Levis before.

I think some varieties of Levi’s come in leg lengths; it might be an inches measurement, or it could be R (regular) or L (long).

Most all pants sold in the US have both a waist and leg length (inseam measurement) in inches on the label. There are many leg lengths to choose from, not just short and long. I was not aware that leg length is not noted in Australia (I am not a slave to fashon and seldom shop for clothing). So far I have only bought one pair of pants in Australia and for my correct waist size they are too long and I will have to get them altered.

The US did make an attemt to switch to the metric system back in the 70’s and I remember being introduced to it in the 3rd grade but not learning any metric measurements in school after this time. I am being immersed in it now living here in Melbourne but I still sometimes have to convert the metric figures to US measurements to visualize and understand the measurement.