I was going to write a blog post about yesterday’s Metcard kerfuffle, in particular pointing out that despite my initial speculation, the Transport Act only requires passengers to make a reasonable attempt to buy and validate your ticket.

It doesn’t require you to buy another ticket if yours doesn’t work, carry spare change, plead with passengers for change, and finally get off the tram if no alternative is available. That appears to be bad advice given to both the Authorised Officers (inspectors) and Metlink staff in this case. It is well beyond what is “reasonable”. It’s also illogical; nobody would have the expectation that, having bought the ticket and tried it unsuccessfully in two validators, they might get fined.

In the case of this punter, it appears his ticket may have been faulty, and was taken away for investigation, and he was told twice, separately, completely the wrong thing about what he should have done to avoid a fine. Messy.

Rather than rant some more about that case, instead I’m just going to point this out this little factoid which often escapes peoples attention:

Metlink is a marketing body. It provides information. That’s all they do.

You could be forgiven for thinking they do more — the arrangements are quite confusing. In this case alone, you’ve got Yarra Trams (who run the service and employ the Authorised Officers), the state government (who authorise the Authorised Officers, write the legislation they act under, and review the Reports Of Non-Compliance that the AOs write, and decide if they’ll result in fines), OneLink (who operates the Metcard system), Metlink (to whom the passenger made enquiries about it).

I wish I could explain all this with a diagram, but I don’t have the time to draw one up. Instead, here’s an official (though obscure) diagram of how the trains are managed. (And this one is more about operations and maintenance, so it excludes most of the other bodies above.) 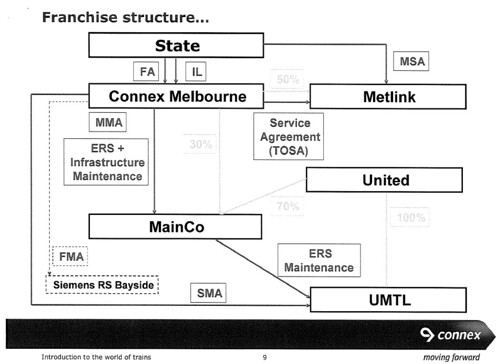 No wonder people are confused, and why some are calling for reform of how PT is managed.

*Actually, it appears that nobody co-ordinates timetables across modes, which is why trams and buses and trains connect so badly. Well, apart from a handful of bus/train and bus/tram connections that are so rare they have a special name.

15 replies on “The Metcard mess, and what Metlink does”

Reasonable is a word very open to interpretation, which I suppose is why it was used. What a mess.

In your blog post please try and think of a way that stops people deliberately damaging their tickets and then travelling on them forever. A faulty ticket needs to be removed from use somehow.

Turns out the validators were apparently working. While it doesn’t clear up the mess relating to the actual advice this person received, it does take the fizz out of the soda for all this fuss.

I have a lot of experience with the systmes in both Tokyo and Hong Kong. In Tokyo, if your card fails to read, the next time you try and use it at a station, the gate won’t open. You are then prompted to go to a help desk, where a person scans your card and says “yesterday you got on at staion x but your card didn’t read at the end of your journey. Where did you get off?” You then just say where you went, the person makes the adjustment, and then off you go! Simple. Efficient. No fines. No blame.

Sounds pretty good to me.

I love how in that diagram, between State and Connex Melbourne are two boxes that read FA IL.

Anonymous, well, you start by not assuming everyone having problems with their ticket is guilty. You explain to them correctly what is to happen with their ticket when it’s taken for testing, or even better, if possible, replace it on-the-spot.

Yep, Yarra Trams now say the validators are working. But evidently they didn’t work correctly with this ticket. Regular users know this isn’t an uncommon theme… I’ve heard of Yearlies that work fine in every station ticket machine, but fail to read correctly on many trams.

One of the benefits of Myki is that with no moving parts, hopefully it’ll be more reliable.

“Trainlink” services aren’t advertised as such due to their connections; they are bus routes in lieu of an extended rail service. That is why they have a special name. It is not because the rail connections are guaranteed; that is merely a nice addition.

In regards to connections, I think the best way to deal with this issue would be to increase bus services to every 10 minutes during 0600-2200 at least. Every service, every day of the week (including public holidays). Then you don’t need to worry about missing the connecting bus because by the time you walk from the train door to the bus stop pole, the next bus is only a few minutes away.

Hi Adrian – that might work well at a gated station, but how about on a tram?

Daniel – if the ticket is taken for testing, then yep I agree that everything should be explained correctly. But what should the onus be on the commuter who finds himself with faulty ticket? Buy another one, or keep travelling until he gets inspected? That could be months, depriving the whole system of revenue for that time. I mean it may be that he damged the ticket himself, or that it got damaged through his lack of care.

And, while you say that we should start by not assuming that everyone is guilty – well i reckon most people without valid tickets *are* guilty (including quite likely the gentleman in the eye of this storm). And it is their greed that wrecks it for the few hostestly confused people.

But I agree – Myki should eliminate a lot of reliability problems.

In slightly related news, apparently people are handing out brochures at stations saying you can register for your free Myki now… but when you go to the site and try to register, it still only allows registrations from country trial areas. Not to mention during the registration process it’s difficult to put in a proper address, and it’s possible for the “title” field to be greyed out so you can’t change it but it’s still required.

Doesn’t bode well, unless they are revamping the site for the main launch?

@Nathan: the myki website *asplosions* if you try to get a Myki and don’t have JavaScript turned on; server-side error. Nice. Someone is totally earning their money on that one, what was it, $1.3b?

Another Glenhuntly road tram last week, and the validator beeps once to indicate a succesful validation. But didn’t print. So transferring to a Connex train, where the station validators again indicated ticket was OK, how does an inspector know the ticket is OK? I asked the Ombudsman and Metlink, and was advised I should have purchased another ticket, and that if inspected, the ticket would be confiscated. I don’t think that is ‘reasonable’. Faulty validators happen wiht great regularity, but the administrators claim it never happens. Buying another ticket to replace one that works OK is stupid.

Who gave you precisely which advice?

The Fares and Ticketing Manual is very clear that if the print isn’t visible, the encoded information is not only okay, it is authoritative.

So such a ticket is perfectly valid, though it’s true the ticket might have been confiscated for investigation if an inspector checked it.

If Metlink has given you the wrong information on this, I’d encourage you to complain to the PT Ombudsman.

To Anonymous: Give people a receipt for their faulty ticket that they can show to the officers, that is good for a week from date of receipt, until they can post you a replacement. If you have a ‘history’ of getting replacement tickets, they are going to be suspicious that you’re damaging them.

Years ago, when I enquired about this, I was informed that it was DoI’s responsibility to arrange sufficient coverage and synchronise the schedules.

And as Dave has noted ‘Trainlink’ are not in fact named for linking with trains. In practice I’ve noted that the bus drivers prefer to leave just *as* the train arrives for maximum customer aggravation.

Yes, it’s a shadow-train service, but it is intended to link with the trains. That’s the clear intention, as stated in the Metlink patter on the web site:

TRAINLINK SERVICE: Route 571 is a TrainLink service between Epping and South Morang, featuring connections with every train at Epping Railway Station.

If it’s regularly occurring that the bus drives off as the train gets in, I’d be complaining to the bus company, and if no luck there, the Public Transport Ombudsman. The TrainLink routes are the places where connections should work properly.