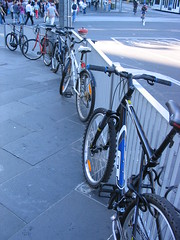 I said in May I had my doubts about the bike hire scheme for central Melbourne.

Well, it’s been announced that the RACV will run it, and it’ll involve 600 bikes across 50 sites in the City of Melbourne.

There’s some irony to RACV running a bike hire scheme. I guess it’s another thing to help them look green while they continue lobbying for motorways — thus their claims to be a ”mobility” group – not just an automobile group.

And how will the bike hire scheme get around the legal requirement to wear a helmet while cycling?

It won’t. You’ll have to bring your own. — But Melburnians and visitors will have to provide their own protective headgear as none will be available and cycling without a helmet incurs a fine of $58. — Herald Sun.

Which means Gordon Oakley’s claim of it being an opportunity for “those visiting our beautiful city to explore it by bike” is a crock. Unless tourists (who are not bringing their own bikes) are going start bringing helmets along.

Jeez. I thought this scheme would have problems enough, but who is going to bring their own helmet? It’s like having to take your own steering wheel to hire a car.

I reckon this pretty much condemns it to failure. At a cost of $5 million, it looks like it’s going to be (as Bicycle Victoria’s Harry Barber predicted) $8000 bikes sitting by the side of the road.

Meanwhile, people (like me) who want to cycle more still won’t because of a lack of bike lanes and other safety measures.

(By the way, I love The Age’s description of the RACV man taking the bicycle away in a taxi — sounds like Ben Elton’s Gridlock yet again.)

Actually bringing your own helmet is most similar to bringing your own child seat to rent a car. It’s a pain in the bum, and that’s why car rental companies can usually rent you a child seat too, for a minimal additional fee. Why not have a rack of pink helmets at each bike rack so you can grab one with the bike? Presumably each bike will have an electronic tag of some sort so the rack knows when you’ve signed it back in. Do the same for the helmets. They only cost about $25 each if you buy cheap ones.

Daniel
Interesting. A shame Melbourne can’t be a bike-capital like Amsterdam and other cities in Europe. Incidently, a “bicycle lane” won’t tempt me to ride on the road – still way too dangerous.

I’m in many minds on this issue:

I thinks it’s stupid to have to BYO helmet, but if that’s what it takes, then so be it – it’s not a massive item to strap to a backpack etc… Silly, nonetheless. But again, this is useless for tourists.

Philip’s suggestion of pink helmets is a good one – no-one will steal a pink helmet, that’s for sure! Seriously though, we are blessed with a flat city like Amsterdam, and yet we have the RACV running our bike ‘scheme’. They are two completely independent, opposing interests, and frankly if the RACV had it’s way, we’d no new PT, have more roads, and sure as anything we’d have less bike lanes.

The inner 5KM of the city should be bike and PT-favoured, and frankly I would favour increasing bike lanes, increasing [or creating] extra fees for private cars to park in the city (except for actual city dwellers), so long as infrastructure was significanlty boosted to allow people viable alternatives.

I am dreaming, but we have an entirely unsustainable future, and Melbourne is becoming an LA with it’s spaghetto freeways and go-nowhere roads…

Tell you what, if I come across any $8000 bikes sitting on the side of the road I’ll be the first to sling one over my shoulder a cycle it home :).

Ironically, riding on the road is only dangerous because people dont ride on the road!

There are very strong arguments against dedicated and separated cycleways – basically it says bikes don’t belong on the road. What happens when the cycleway doesn’t go where you want to go? You then have to interact with cars when the cycleway ends. The better solution is to have a broad left hand lane, and have it as common practice for bikes and cars to interact – this raises driver awareness of cyclists in general. (see http://www.johnforester.com/).

The helmet issue is another screw up. Mandatory wearing of helmets was introduced because “it saves lives”… It was just another political maneuver so they could be seen to be doing something. Unlike the wearing of seatbelts, there is no statistical evidence that helmets “save lives”. If you are debating from a financial point of view (ie medical expenses) it could be argued that the helmet laws caused an increase in net medical expenses due to reduced general health as there was a dramatic drop in the use of bicycles as a form of transport when the laws were introduced.

The helmet laws and safety on the road are somewhat intertwined as well. People stopped riding, and stopped allowing their kids riding to school – the logic goes something like “They wouldn’t make you wear a helmet if it wasn’t dangerous, so I wont let little Johnny ride to school”. The parent then drives little Johnny to school, increasing congestion, reducing the number of visible cyclists, and thus making it more dangerous for little Johnny to ride to school.

Anyway, this looks like the RACV is kind of setting it up for failure :- “we tried to get people on bikes, but they obviously aren’t interested, so we should build more roads”.

It’s pretty obvious and easily proved that hitting your head on the road without a helmet can kill you in many circumstances. I have no problem with compulsory helmet laws. I just think helmets should be hanging on racks wherever these bikes are.