If you’ve wondered about the LEDs being increasingly used for traffic lights, apparently they use 60% less energy. 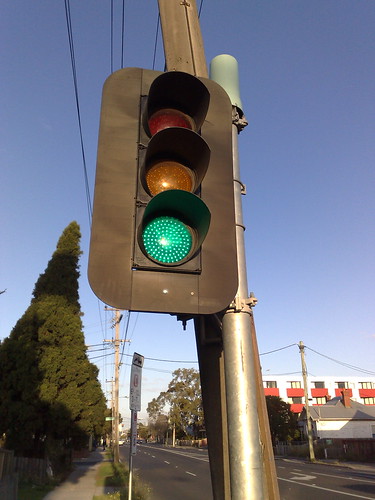 They also last about ten times longer than conventional bulbs. I assume the design, which includes a whole bunch of individual LEDs, also allows for some redundancy, so some can fail but the entire light doesn’t stop working.

I recall some of the first LED traffic lights in Melbourne were installed along Westall Road in the early 2000’s when they did the duplication along there and the rail overpass. The two types were installed on new projects as the budget allowed (LED’s were more expensive) byt now are pretty much standard for new installations.

I guess the next step will be their common use in household lighting (already started to happen in shops and as a substitute for the mini halogens) although I am not sure on how fast this will come onto the market – seems the CFL’s will still be around for a while – mercury vapour and all!!

LEDs are the future! Seriously though, as nerdy and boring as it is, LEDs have come a LONG way in the last few years. They are starting to challenge HIDs for brightness, and when your compare power consumption, HIDs don’t stand a chance.

As Andrew mentioned, the next step is common household lighting. The challenge there is probably in housing and optics, but they are already a decent substitute for halogen bulbs / downlighting.

I once met a guy whose job was to change the bulbs in traffic lights. Apparently they all sit around, not unlike at a fire station, and wait for a call to come to the rescue. Paid ridiculously well…

presumably most of those controllers have been phased out now … although given that up until only very recently there are still a few lights around with the red, red+yellow, green sequence they might last longer than one thinks …

After looking at the article you linked to, I wonder if this is going to affect the Traffic Light Tree in London’s Dockland area:

Sadly, I learnt about this after getting back from our UK jaunt last year …

I just needed to know absolutely all of that, thank you.

We were discussing what globe to put in our bathroom. Couldn’t find an incandescent 60w so we went with a CFL after some discussion about LED.

We put 3w LED bulbs in my son’s Lightning McQueen and Spider-Man nightlights after the 7w incandescents they came with burned out. They’re supposed to last until he goes off to college or some other ungodly span of time.

Every one of ours were changed over in Adelaide around ten years ago – it’s more a case of being increasingly used for “other” signals such as pedestrian signals, no right turns, etc.

And yep, after a few years there’s a few here and there that either have groups of LEDs that aren’t lit or for some strange reason flicker in a weird fit!

I have an LED flashlight (torch in Australian?) that is blindingly bright if you look directly into it. The light that these new bright LED’s give is rather cold, blueish, and harsh and this will have to be improved upon before they would be welcome by most people for general home lighting. At this time they are also very expensive but like anything else the price should come down as they become more popoular. Many cars made nowadays have LED brake and turn signal lights too.

I have seen mentioned several times that CFL’s contain some mercury and that it might pose an increasing hazard in the future as more and more are disposed of. This is not a new problem as regular flourescent tubes also contain mercury and these have been in wide use for close to 70 years.

Daniel, you would have liked to have seen this taxi impaitently nudge its way into a crowd of people crossing the street including me. The red man had just begun to flash. Several people shouted at him and I loudly and quite firmly pounded my fist on his hood (bonnet?). This took place in the CBD at the intersection of Swanston St. and I think either little Collins St. or Flinders Lane just before 6 PM.

I am well aware all fluros contain mercury – the electrons in the mercury atoms are energised and produce UV light with the phosphor coating on the outside changing that radiation to the visible spectrum.

My point about CFL’s and mercury was that they were being flogged to death as enviormentally friendly (people wearing green at shopping centres handing them out) when they weren’t so really, apart from using less energy. At some point LED’s will probably enter the market to take on this role for household applications

And yes I have one of those LED blue-ish bright torches too.

Chris, evidently Adelaide’s ahead of the game here!

Jed, did someone take down the number and report it?

Andrew, something I read yesterday said that in places like Victoria where the majority of power is coal-generated, the amount of mercury used by CFLs is less than the amount used in the energy saved, so we’re ahead there.

My next post expands on CFLs for household use.

I doubt anyone took the taxi’s number down as this happened quickly and he drove away. After pounding on his hood I did not look at him for a response and thought it a good idea to walk quickly away too.

LEDs are highly monochromatic, so producing “white” light requires either the mixing of multiple distinct wavelengths (as happens in trichromatic LED displays), or using a phosphor material.

Much like the mercury in fluorescent lamps, the phosphors in white LEDs are usually transition metals or rare earth compounds. Some of the energy is inevitably lost as heat because the Stokes effect isn’t free.

I’m betting my money on the next generation of plasma emitters, such as the ones produced by Luxim.