Contrary to what some people seem to think, in December when Connex are gone and the new operator starts, miracles will not occur.

Girl to friend on train: “I can’t wait till the Japanese take over Connex. We can then get to Frankston from the city in, like, five minutes in the bullet train. It’ll be totally awesome.”

Once MTM (who are from Hong Kong, not Japan) take over, the trains won’t magically be on time. Cancellations will not magically stop, trains won’t be magically less crowded, station staff will not give you a hot chocolate and a five dollar note each morning, and rainbows will not appear in the sky. 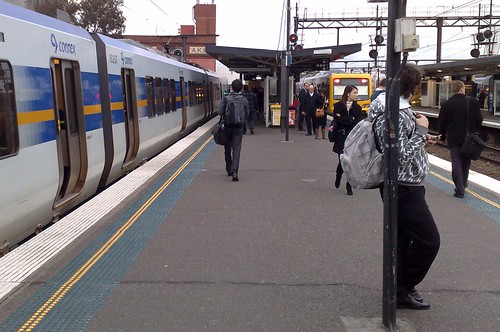 The new mob will have the same trains and the same tracks — all the responsibility of the government.

And it’ll be almost all the same staff — though one wit suggested to me that MTM might give everyone new uniforms and simeltaneously shuffle them all around, so those people who board at staffed stations would see “new” people on duty.

So what will change apart from the logos?

It’s a little hard to tell, as the details of the contracts have not yet been released. Over time we should expect some operational changes, depending on how much they decide to influence future timetables, staff training and duties. The EOI documents indicated there’d be some changes to cleaning regimes and other “soft” stuff, as well as (one would hope) some improvements to the way information provided to passengers. (No, it’s not clear yet if the Connex SMS updates, which I and many others find very useful, will continue in their current form. Ditto with Tram Tracker.)

There are rumours that the new name for the trains will involve the word Metro. Given the precedent of trains every 10-ish minutes on the Werribee line, the optimist in me says that when the new contracts and name are announced, they’ll also announce a plan to introduce frequent services of at least every 10 minutes on every line, all day, every day. Like, well, a Metro.

The other coming changes are not down to the operator, but are infrastructure-based, including new and extended lines, and more trains, are all the responsibility of the government. When you tally it up, there are a surprising number of infrastructure changes coming to the rail system. Here’s a map that I’ve mentioned in passing before, which was done for the PTUA:

12 replies on “They can’t perform miracles”

Is there any proper commitment to sort out the air-conditioning problems on the Comeng trains? This is one of the main problems facing the system every summer when it gets above that magical 34.5°C and they start being withdrawn. Furthermore it will be exacerbated on the old M>Train lines with the arrival of the X’Trapolis trains resulting in more Comeng running on these lines. Referring to an older post you quoted that they were ‘testing this in coming months’
http://www.danielbowen.com/2009/07/29/the-new-trains/

Riding the Comengs on hot days I can safely say the air-conditioning systems on these are next to useless.

As far as I know all they’re doing this year is testing some replacement units on a couple of trains to see if they’ll cope. Presumably if they do, they’ll roll them out more widely.

An update on this: the contracts announcement says the aircon will be upgraded to handle up to 45 degrees.

BUT WHEN? im not betting they’ll be done by this summer, so it’ll be another disaster run, even with the new ‘Metro’ operator.

Hopefully we’ll eventually get Metro by name AND by nature

As long as it has very frequent services (around the 5 minute mark) in the inner city area, I guess it can be classed as a metro, but you would have to make new underground tunnels to really call it one.
Melbourne is a hard city to make a metro out of. Cities like Paris are more compact, and have a seperate metro to it’s suburban network (RER and Transilien), and yet for a sprawling city, to have a suburban network and try to turn it into a metro would be very hard.

Maybe Brumby and the state government ought to have a seance and summon the ghost of Benito Mussolini- at least he got the trains to run on time!!!!!!!!!!!!!

Yes – I saw the airconditioning upgrade thing on the news last night!

Still have the track and signal problems however , which I guess won’t be fixed in a hurry. Seems to me they hide behind the private operator arrangement to avoid proper track or signal renewals for lines still under the responsibility of Vic Track.

A notable exception was the Sandringham line which was concrete sleepered (except for sttion pits like at Prahran). It seems to be done on an ad-hoc basis

Parris, my view is a Metro is possible without building lots of tunnels. It’s about frequent services, not tunnels.

Andrew S, they are replacing sleepers to help with track buckling, and although it’ll take 15 years to finish completely, they are targetting troublespots first.

Nothing planned for the Alamein line? Just wondering because I’m moving into the area soon… ;-)

Andrew, you’ve forgotten all the re-sleepering work between Ringwood and Belgrave that recently finished, as well as on the Hurstbridge line at the moment, both a similar treatment to Sandringham.

Trish, there’s no immediate infrastructure plans for the Alamein line, but remember it’s one of the least crowded on the network.

ah yes … I did a gunzel trip out RIngwood way and did notice the smoother ride and concrete sleepers out that way!!