Yesterday we headed up for our semi-annual (?) trip to the snow. With Mt Donna Buang (the closest) looking a little lean in the snow department this weekend, we opted for Lake Mountain: myself, Isaac, Jeremy, my nephew Leo and his dad Adrian (driving).

As we headed up the Maroondah Highway, we could see the effect of February’s fires only too clearly. Large numbers of trees burnt; some in their entirety, some only up as high as the first 5-10 metres, as if the fire was too busy rushing through to bother to completely devour it. 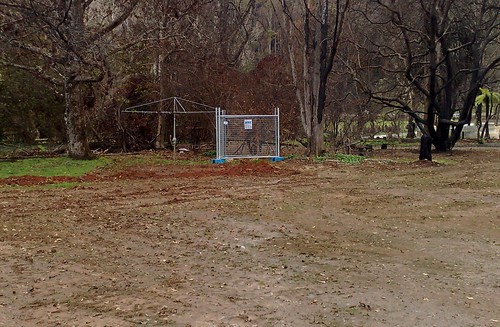 We reached Marysville, and stopped to hire some toboggans. It’s quite erie — so many buildings are gone. On several blocks, all that’s left is the Hills Hoist.

We got to Lake Mountain by 10am, and set about putting on the extra layers of clothing, then headed to the first toboggan run, right next to the main building. There was plenty of snow around, and in fact some more was falling. All around the resort were hundreds and hundreds of charred trees. 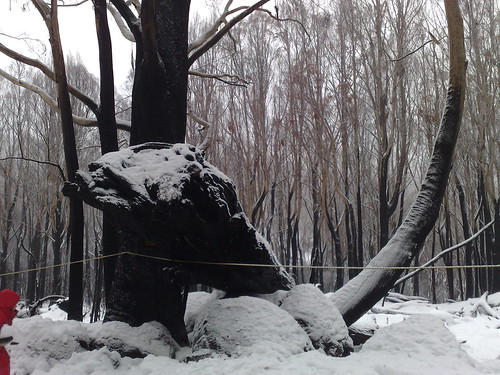 The toboggan run was pretty busy, but good fun, and we had a few goes there before looking for the second run. That, sadly was quite muddy in parts, and we decided instead to find the third run.

The third run is shorter, but much faster than the first, and there were fewer people around. Initially Isaac and Jeremy declined to go on it, but they relented later. Adrian (and Leo) and I seemed to enjoy it most, though the bumps on the way down left me with a sore bum later. After a few goes on it, we went to find the snow play area, and built a snowman.

After some sandwiches in the shelter, we did the two good toboggan runs again. They were much more busy this time, and by the time we got back to the faster run, a lone resort worker was trying to keep things running in an orderly manner and without too many accidents occurring.

It showed how silly some people can be — despite his repeated pleas, people kept hanging around at the bottom of the run, like sitting ducks to be hit by anybody sliding down — and given the speed at which you flew down, there was little in the way of steering possible. Other idiots were climbing up the middle of the slope rather than using the sides — again, inviting collisions. 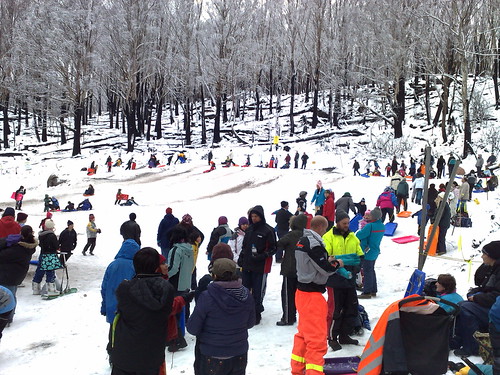 Anyway, after a few more slides, young Leo was overdue for a nap, and we headed back to the car, stopping again in Marysville to drop off the toboggans and pick up some hot chips, and then driving back to the big city. All in all, it was a good day out.

Looks like it was a lovely trip. That is so tragic, yes, about the fires you had there. Unbelievable how bad some communities got hit. It’s nice that the tourists are still going to come for the snow fields and toboggan runs.

The photos of blackened trees with snow on them look eerie.

What a contrast. Drove up the Hume yesterday and was surprised at the extent of the burned area at Wandong, it extended nearly all the way to Broadford. In a way it is quite beautiful, with the black tree trunks surrounded buy the lash green winter grass and regrowth.

Also noticed the same thing in the pine plantations at Kilmore East, where the bottom 3/4 of the trees were burnt, leaving the top 1/4 green. The fire definitely was in hurry.

I saw lots of burnt trees and a few charred signs too when I took as drive up to Yea on the Melba Hwy. a few months ago. I will have to go see some snow soon. If you can believe it my first and second driving lessons were on snow and ice in Chicago.

Looks like everyone had a great time :)
Bizarre to see those blackened trees and to realise only 5 months ago there was a raging fire where that snow is now.
Australia is just so extreme.

Always wanted to do that, never even *touched* snow :(

Hi,
We were at Lake Mountain the day before you and had lunch in Marysville, it had the feeling of a graveyard. I agree that the blackened trees against the snow were surreal and that the damage to the region needs to be seen to be believed. These people are really suffering but go to work everyday, many were at Lake Mountain working at what is left of the resort.

I don’t think all of the vegetation will grow back, there were some regions that looked completely dead and black with no new growth, not even moss.
A very sobering experience