When I’m out walking, I actively (but not foolishly, I hope) defend my rights as a pedestrian. If I have an opportunity to walk safely and legally before a car goes, I will take it.

The main rules are not difficult to comprehend, but some motorists just don’t seem to understand them.

[Page references are those in the Vicroads PDF summary of the road rules.]

Red means stop. It doesn’t mean drivers can zoom through at the last minute. Given that Yellow actually means “stop if it is safe to do so” [p27], there’s no reason why drivers should still be travelling through the intersection after I’ve got a (conflicting) green man. Not that there’s much I can do about this but glare.

Drivers are meant to stop behind the stop line, not halfway across it blocking the pedestrian crossing. If blocked by the cars ahead, that’s the driver’s fault for not looking ahead to make sure it was clear. [p27]

The zebra crossing means vehicles have to give way for me to cross. If a motorist was driving so fast they had to brake sharply, that’s their fault [p58]. (I view extended periods of delays to motorists at busy zebra crossings, such as in Flinders Lane, with some glee. If they were stupid enough to bring their car into the middle of a big busy city, they’re going to face some delays in their quest to get to the next red light.) 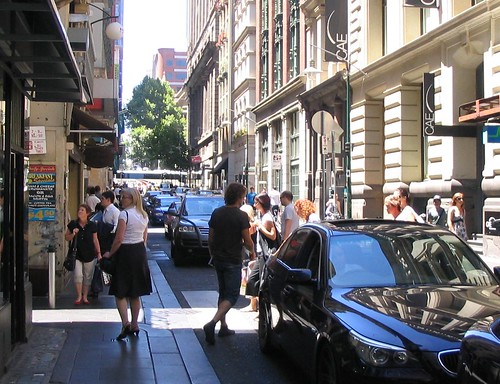 Flagged Children’s Crossings are more strict. Vehicles have to stop if someone is waiting to cross, and not drive through until the last person is completely off the crossing. [p57] (I also recommend not trying to run down crossing supervisors at lighted intersections, such as some right-turners at McKinnon and Jasper Roads seem to do.)

Vehicles are not allowed to park on a footpath.[p78] Foot. Path. It’s really not that hard.

If a driver is turning across my path, they have to give way to me [p29] — unless it’s a roundabout.

Many motorists, myself included, give way when coming out of side-streets to crossing pedestrians. Strictly speaking vehicles don’t have to do this, but personally I consider it polite.
(Update: Commenter Andrew notes elsewhere the rules say: “At Stop or Give Way signs […] you must not only give way to vehicles, but also to any pedestrians at or near the sign […]”. [p31] However it appears that this specifically applies at locations not at intersections. I’m not clear on why you’d have such a sign that’s not at an intersection.)

If a vehicle is going into or coming out of a driveway or carpark or whatever, they have to give way to me. [p60]

Drivers have to stop for tram passengers unless there’s a safety zone/platform stop. [p60] The tram is a big thing on wheels that’s 3-5 times as big as a car; there’s no excuse for not seeing it.

I don’t have to cross at the lights if they’re more than 20 metres away (but I’ll certainly do so if it’s safer to do so).

The above rules are, I think, pretty logical.

But there are some others I learnt about while reading up on it, which I suspect not so many people are aware of.

Footnote: Why have VicRoads published the road rules in a PDF that doesn’t allow you to copy text out of it?

16 replies on “My rights as a pedestrian”

I have many peeves with other drivers, and try to be as courteous as possible myself, but my major whinge in this vein is people who park in driveways across footpaths. When out with a pram, it’s so difficult to manuovere around these people. Who wants to take a pram on the road? Where possible, I go around them ON their property, instead of the road.

Thanks for this Daniel. I think what gets me most riled up are drivers who totally ignore stop lines at intersections. I’ve been known to give cars an open-handed slap – makes a lot of noise, but does no damage. Glaring’s good, too, and probably safer …

regarding the “Drivers are meant to stop behind the stop line”, whenever i see this one in town id love to hop in the back door and pass through the car exiting on the other side.

“Vehicles are not allowed to park on a footpath.” – except, apparently, along Maribyrnong Rd, near Mt Alexander Rd, Moonee Ponds. For as long as I’ve been driving around Melborune (15years), cars have been parked all along the footpath and nature strip of this stretch of road.

The roundabout rule annoys me. It’s out of step with the other rules that give the pedestrian right-of-way and confuses everyone.

I live in Anchorage, Alaska, an extremely, almost militantly car-oriented city. Misguided zoning has produced a city that is only marginally walkable, so peds are viewed with suspicion or outright hostility. Nevertheless, the rules of the road as Daniel has laid them out conform to my memory of the corresponding traffic laws here. In theory, a pedestrian has it pretty good.

But any habitual attempt to exercise these rights is, unfortunately, liable to be life-shortening. I expect that’s true both here and in Melbourne, but I’m positive that the open-handed-fender-slap, if applied to Anchorage, would lead to hospitalization or fatality within the first ten attempts.

“Many motorists, myself included, give way when coming out of side-streets to crossing pedestrians. ”

Covered, generally, by page 31… “At Stop or Give Way signs […] you must not only give way to vehicles, but also to any pedestrians at or near the sign […]”

So, assuming, you are facing a stop or give way sign, what you are doing is legally required. But this is not the case if you are at an interesection without stop or give-way signs (e.g. a T intersection).

The solution to motorists driving too fast over zebra crossings is to make them speed humps. An example of this is the crossing in Neerim Rd outside Murrumbeena Station.

At least here in SA, zebra crossings were a myth – there was actually no such thing in the rule book.

To that end some councils years back made shopping centres remove them from their roads as, while drivers did honour the zebras, it was ultimately giving pedestrians a false sense of security since the zebra crossing was meaningless.

That said, I think the rules may have been amended (or it was addressed when the road rules were more or less standardised nationally) as they seem to have reappeared over the years.

I must admit that there have been occasions where I’ve been concentrating on too many things at once (the traffic, looking for where I’m going, hearing the kid spill his drink all over him in the back) and I sometimes don’t let pedestrians cross when they should.

However, I do usually try to make sure I pay attention to what they’re doing, so that they can get across the road. Living now in a place where I can walk to where I need to go a lot of the time, I’m experiencing how scary it can be as a pedestrian along a very busy road with many side streets.

I guess that a vast majority of motorists just don’t get to experience it from the pedestrian point of view enough to appreciate how difficult it can be for a pedestrian.

Frank/John, I’ve been known to gently but noticeably tap my hand on the bonnet of a car that has fouled the pedestrian crossing.

Andrew, thanks for finding that. Have added a correction in my post.

I can almost guarantee that any vehicle coming out of the roundabout at Southgate near the Langham Hotel (heading south on Southgate Ave towards City Rd) will NOT stop for pedestrians.

I suppose the thing that makes me saddest about all this (from the motorist’s point of view – and this applies to SA where I live, but maybe not to other states) is that there are still rules covering Jaywalking but with all the other rules giving pedestrians virtual “open slather” the Jaywalking ones are (almost) never enforced. I nearly cheered out loud late last year when a Police Officer walking the beat in Adelaide CBD followed a pedestrian 3 blocks to give him a ticket for Jaywalking!!!!!

Daniel, you mention about motorists running the red and amber lights, but you don’t mention the pedestrians’ (almost) complete disregard for the flashing red man. I sometimes feel like awarding a Certificate of Achievement to any person who actually stops for that signal. But I wouldn’t be spending a lot on such Certificates – I haven’t, in 6 years of living here, seen a pedestrian in Adelaide’s CBD who’d qualify for one!

Noel, see this previous post. As it happens, Melbourne police are currently doing a blitz on CBD jaywalking.

However: A motorist running a red light is risking lives. A pedestrian being foolish is going to harm nobody but himself.

I’m not altogether sure about that glib Vic Roads statement that cars exiting from a roundabout do not need to give way to peds. _when_ the pedestrian is crossing within the intersection as defined by the property lines. Councils in car-centric locations (eg Echuca) go to some effort to corral the peds. away from the intersection. You could even consider the exits as a form of slip lane.

Have further revised the point about cars turning out of side streets. Although p31 does indeed say motorists have to give way to peds at Give Way and Stop Signs, that’s specifically concerning locations that are not at an intersection, though I don’t see why you’d have a sign other than at an intersection.