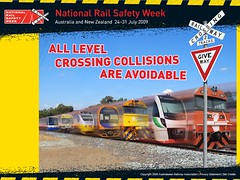 Just over two years after the accident, the verdict in the Kerang disaster case was returned yesterday. The truck driver was acquitted.

There’s no question over the fact that he was at the wheel, or what happened after impact. And we know that the crossings lights and bells worked, because the traffic coming the other way had stopped, and the lights could still be clearly seen flashing hours afterwards in the TV news footage.

The question wasn’t whether he failed to stop, but whether it was culpable driving. Reading some of the news stories, it seems the jury decided it was not, on the basis that he didn’t see the flashing lights and the train until too late — and that V/Line and others had actually asked for an upgrade of the crossing for some time before the crash because of poor visibility.

No infrastructure is perfect. It can’t save you from yourself if you’re inattentive. I think it’s a shame when people don’t take responsibility for their own actions. And I sincerely hope that others don’t take the lesson from this that it’s okay to behave recklessly around level crossings. The attitude towards them seems quite different to that towards other road hazards — and I wonder if this played a part in the verdict.

Indeed, I’m left wondering what the verdict would have been if instead of a railway crossing warning light and a passenger train, it had been a Give Way sign, and a school bus.

9 replies on “The Kerang verdict”

404 error on the first linky

Although I agree that the truck driver definitely could have paid more attention to his surroundings, the fact is that NSW has not one level crossing.

Take out the truckie for one second, and consider the well being of train travellers (of which I will be one tomorrow). If cars and trains can’t cross each other’s path, then train travellers will be much safer.

Victoria has no excuse for building new tracks and revising old tracks without fixing this issue. Road accidents will always occur whilst humans are driving, so let’s get the trains and trams out of the road equation. The Government shares the blame in my view – they chronically underfund PT and associated infrastructure, and this type of incident always has been, is and always will be the inevitable cost every now and again until the Government pulls money from (somewhere) and does the right thing.

Andrew, *Sydney* has very few crossings, but regional NSW has a large number of them.

But yes, grade separation (or failing that, at least boom gates) is not happening fast enough, and although it’s not 100% failsafe (see the Selby, UK accident), it almost entirely eliminates the problem.

Sounds, Daniel, like you are raising a point related to a similar discussion which I think once appeared in your blog? That is, the removal of road safety signage in parts of Holland. A study showed people drove more carefully (and with fewer accidents) when they could not rely on being told what was safe to do.

So, it *is* about taking personal responsibility and not just going about your day on autopilot, preoccupied, ‘mindless’ or relying on ‘experts’ to keep you right or keep you safe.

This principle could apply to our daily lives, not just to road safety. It could help us become more sustainable as individuals and as a society if we paid more mind to our daily actions, decisions, choices and their consequences.

Unfortunately that wouldn’t have helped in the Kerang case because of the alignment of the crossing and the difficult sun glare situation at that time of the day at that time of year. The crossing is much safer now, with its boom gates and advance warning lights.

We need multiple layers of safety at places like level crossings. One of those layers is vigilance by motorists, but the other layers are very important too and certainly make drivers’ tasks easier.

Regarding school buses. Buses or was it just school buses used to have to stop at railway crossings. I wonder if they still do.

Last time I checked, any heavy vehicle (including bus) driver has to stop at a sign controlled level crossing, open the window and check for trains before proceeding. This may have changed recently but probably hasn’t.

At a signalised crossing, the driver must obey the signals. The signals have a number of fail-safe mechanisms built in.

Of course, at a lot of Victorian crossings it is not possible to take off from a standstill in a truck and clear a crossing before a train appears and hits the truck. This is due to sight distance restrictions and is one reason that many trucks simply drive straight through some crossings without slowing down – the odds are in their favour if they don’t stop. If they do stop, they can’t see enough track to be sure that they’ll be safe to move off. The only way to be safe would be to wait for a train and then go as soon as it passes. This could be a 12 hour wait in some places.

I love how juries can fall for the “it’s not my fault I wasn’t paying attention” excuse – personally I hope the govt appeals the verdict.

It sends totally the wrong message to drivers – but I suppose it goes perfectly with the “it won’t happen to me” approach.

Call me a b!tch, but he got off lightly.
He admits he has travelled that road many times, and yet he failed to even look for a train?
If he did that each time, he’s damn lucky he didn’t hit one sooner.
Next time, when he hits a kid getting off the school bus on a country highway, he can trot out “Well golly gee, I just wasn’t looking. Awfully sorry about that.”

Sorry mate, but you are driving what is a lethal weapon when moving at 100kph. (and I’ll bet my last dollar you weren’t doing the ton or less, were you?)
If you didn’t notice lights and bells, you would have gone through a boom-gate.

Philip. Where would you have to wait 12 hours before crossing a line? Or are you saying that so many trains pass through a given crossing that you could never move in time to avoid one?