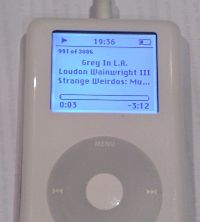 For those so inclined, here’s a music meme.

Take your iPod, or alternative daggy unfashionable non-Apple MP3 player, or even your music collection on your computer.

Pick a song, maybe one you like at the moment, doesn’t really matter which one.

Using the alphabetic list of songs in your iPod/player/computer, list that song and the following 9 in alphabetical order. What do you get?

What I find interesting about this there’s a good chance you’ll hear (and gain a new appreciation for) artists and/or songs you don’t play very often, and from a range of artists and styles. You may even find the same song by different artists, as well as possibly songs along similar themes, due to the first name in the title being similar.

Who else will have a go? Leave a comment or trackback.

Tony’s had a go

Here’s the direct link to Kathy’s.

Fancy that – just got a hand-me-down iPod last night!

hmm … i think i need to brighten my collection …

I only have LPs, they are stacked in alphabetical order – does that fit the meme theme?

Nigel, you might just get away with it if it’s alphabetical by album name — not by artist.

Maybe someone will find me an i-pod for my birthday??

Nice list. This is an easy meme. Some are so long and tiresome that I give up on them.

This is eerily similar to what Slactivist does at http://slacktivist.typepad.com/ each week – not trying to discourage you though Daniel!

1) From A Million Miles, Single Gun Theory, Like Stars In My Hands.
early 1990s Australian electronica. Criminally ignored and vastly underrated.
2) Frontin’, Pharrell Williams featuring Jay-Z, The Neptunes Present… Clones. Choice summery hiphop/ R&B courtesy one of the best producers doing the rounds
3) GBH, Death In Vegas, Dead Elvis. Love the reggae mon
4) Get Get Down, Paul Johnson, Wild Vol 8. Mainstream dance by numbers
5) Get Over You, Sophie-Ellis Bextor, Read My Lips. Former lead vocals with theaudience I still dig the empowered lyrics
6) Get Thee To A Nunnery, TISM, Beasts Of Suburban. Any song by TISM is gold, taking aim at Sophie Lee hosting Looney Tunes is certified.
7) Gimme! Gimme! Gimme! (A Man After Midnight), ABBA, Gold. I like this despite being sampled by Madonna for one of her hits, only serving to show how dynamic the original tune was.
8) Give It Up, KC & The Sunshine Band, Greatest Hits. I love disco. This was in it’s latter days from a pioneering band of the genre.
9) Gonna Make You Sweat, C&C Music Factory. Everybody dance now.

I’ve been listening to ‘My Favourites’ looking for inspiration for my Top Ten for Triple J’s Hottest 100 of all time. So, I was listening to:

White Lines (Don’t Do It): Grandmaster Flash & Melle Mel – I love this track, it got me hooked on hip hop.

The next lot in order are:

1. (White Man) In Hammersmith Palais: The Clash – What can I say, it’s The Clash!
2. White Riot: The Clash
3. White Roses: Deborah Conway – twice, the original and a live version. I have a heap of Deb Conway in various guises from Do-Re-Mi days.
4. White Train: Paul Kelly – Paul Kelly was the only music my wife and I had in common when we married and Post was the only common album. It’s been a fun learning journey for us both!
5. White Unicorn: Wolfmother – flashback post-’70s rock.
6. A Whiter Shade Of Pale: Procol Harum – Big Chill, boy does that date me
7. Who’s Gonna Save Us?: The Living End – Surprisingly the only one from the punk end of the spectrum or does The Clash count as punk?
8. Who’s Lovin’ You: Terence Trent D’Arby – One of my wife’s, not really a winner
9. Who’s That Girl: Eve – another classic hip hop track.

I have my iPod on random most of the time, so I pick what was up to be played next, then went down the list from there:

Calling Elvis – Dire Straits: whatever happened to them? One of the biggest bands in the world, back in the day

Calling You – Andrew Pendlebury and Kate Ceberano: one of my favourite songs, a cover of the song from the folm Baghdad Cafe from memory

Can Anyone be Hypnotised? – Ice Cream Hands: from Sweeter Than the Radio, very catchy album.

Can’t Buy Me Love (Anthology 1 Demo Version) – The Beatles: The harmonies are right up the front on this version

Can’t Buy Me Love – The Beatles: from A Hard Days Night

Can’t Carry On – Crowded House: from the self titled debut. To be honest I forgot about this one – they knew how to put a tune together

Can’t Get Enough – Supergroove: mid to late 90’s NZ pop – a lot of fun… love the line “Having an abundance of platonic relationships reminiscent of my man Mike Plato”

oops… and number ten was:

Fears of a Gun- Birthday Party: I remember sneaking in to see them play in a pub at Frankston, a loooong time ago. I feel so damn old now.

A Forest- The Cure

Friday I’m In Love- The Cure

God Put a Smile Upon Your Face- Coldplay: hmmm, how did that get in here?

Gonna Make You A Star- David Essex: a fun blast from the past, and a fellow Romnichal.

Got the Life- Korn

And in the next playlist……