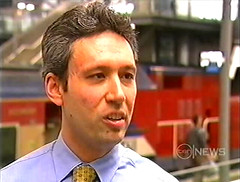 Ever tried to do a press conference at Southern Cross station and compete with a locomotive for the microphone? Don’t try. Locos 1. Me 0.
— Kevin Rudd PM on Twitter

It occurred to me that there’s not very many people who would be qualified to reply in the affirmative to that, so even though I know the man himself probably won’t read it, and it was a rhetorical question, I thought I’d pipe up:

@KevinRuddPM Yes actually, I have done that. Speak loudly and clearly and hope the microphones pick you up!
— danielbowen on Twitter

I’m sure he’d already figured that out for himself.

3 replies on “Why yes, I have done that”

Re “the man himself probably won’t read it” – You never know , i got one back from Malcolm Turnbull the other day

.. & so can I now name drop about having actually met you since you’ve got something so in common with the Prime Minister? LOL! :-D

I semi regularly respond to Hughesy – as he often poses questions to his fellow Twitterers…still waiting for him to pick up on my neverending wit and retweet something I’ve said!