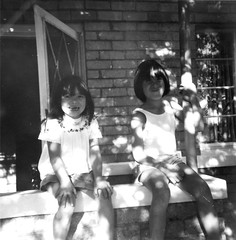 Here’s a list of all the places I’ve lived. Some of the info from my early years is a bit vague. I suppose I could ask my mum for more details, but I’m not sure it’s that critical.

I know from going past and looking around on Google Streetview that most of them are still there, but many of them have been renovated and look little like they did when I lived there.

See also: Commutes of my youth

19 replies on “How many places have you lived?”

Whoa – you’ve moved house every 2-3 years throughout your entire life!!! Do you even get around to unpacking every box? :)

I’ve lived in each home for about 8 years – plus three stints of two years (two years in Sydney, and renting two different places while building my home).

I just added it up and I’ve lived in 16 places and I’m only 34. This doesn’t include 4 stints (4-6 weeks each) staying with relatives or friends when I was looking for a place to live after I moved countries. And I’m looking to move again – eek!

LOL I probably passed you every day going to and from work at the private hospital in Booran Rd there!

That’s a lot of places!

When I was born (1978) my parents lived in a 2br flat in Barkly St, St Kilda (it’s still there, unrenovated). A year or 2 after they moved to Thomasina St, East Bentleigh, where my mum still lives (dad passed away). And when I was about 23 I moved to Ormond Rd, Ormond (ie. not very far away at all) and I’ve been there ever since. Nothing like the nomadic life you’ve had Daniel!

I think the large number of homes just comes from having been in a family that rented, until I finally bought my current place.

Chris, yeah for a while it was a running joke amongst some of my friends about how many boxes I had left still sealed in the spare room.

Jayne, yeah, probably! The hospital was only a few doors down, but gone now, replaced by townhouses.

Daniel, were you born in Sydney or Melbourne?

ugh, i’ve lived in 12 places (including London) in 34 years! One day I’ll settle somewhere, I hope!

Jed, yes, I was born in Sydney. Do you intend to stay in Australia? At what point will you not consider it a foreign country anymore?

never thought i would like living on my own at all but its a small flat in a massive block no its not really like im all alone :-)

Shaz – some familiar streets and place names there!

Me (with a similar record to Daniel):

Daniel, I do intend to stay here in Australia. It might have been better to say “another country” as Australia is no longer a foreign place to me.

To the average person in the US Australia would be considered a very far away and exotic place to visit let alone live in.

WOW! … what a random place to find people from Moora!

dont think i could ever leave WA tho … in fact its hard enuff trying to stay in Perth and not head bush again :(

Born in Geelong – 1954
Before I was 5 yrs old had lived in Carlton, Fairfield and Kensington
5-11 years old live in both 48 and 50 Rouse Street, Port Melbourne
11-17 lived at 27 Rosstown Road, Carnegie
17-18 lived at Kurringai Crescent, Noble Park
18 lived in a flat in Rosstown Road, Carnegie for about half a year
18-19 lived back at Kurringai Crescent then moved into a semi-detached house in Noble Park
19-26 lived in James Street, Dandenong and Agnes Street, Noble Park
26-30 lived in Van Nuys, Californa USA
30-31 shared accommodation in Doveton Vic
31-41 lived in Bishop Street, Brunswick
41-44 lived in Bryant Street, Flemington
44-51 lived in Kent Street, Ascot Vale
51-54 lived in O’Farrell Street,Yarraville
Currently residing in Narre Warren and hating it :-(

so 13 places in 33 years… but 6 moves in the last 3 years has been a killer… we are looking for somewhere to buy so we dont have to move ever again! (well, one more move I guess)

My count comes in at 11 places in 27 years, Newcastle, Sydney, Adelaide, Hobart and back to Sydney.

1 (and first) Ringwood East
2 Carnegie
1 Ormond
1 South Melbourne
2 St Kilda
2 Windsor
and soon to move to BRUNSWICK YEAH !
Not many for 47 years.