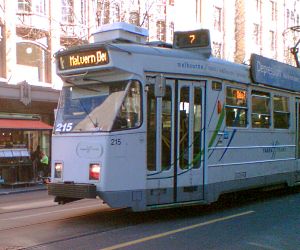 M and I were heading from her place in Footscray to a Clare’s party in Armadale. Train into the city, then either: train to Armadale (quicker, but a 15 minute walk) or tram 6 (slower but much closer). The train had just gone (next in 15 minutes), so we walked over to the tram stop to see when the next 6 was. The sign said 9 minutes.

While I was trying to calculate in my head which would get us there quicker, a tram pulled into the stop. The destination sign on it said “Malvern Town Hall”, route 7.

Something in the gunzel part of my brain clicked. I had a vague recollection that a 7 is a 6 in disguise, which is going just to the depot. If so, it could take us to one stop from where we needed to be. So I asked the driver to confirm my hypothesis: “Are you going down High Street?” He said yes, and we jumped aboard.

The mysterious route 7 tram went as expected, almost right where we needed to go. Few people were on board, I suspect in part because nobody knows where route 7 goes, which also meant it was an express run all the way. Saved: 9 minutes waiting time plus a few minutes for speed.

The silly thing is there’s a whole bunch of these secret tram routes. They’re the tram equivalent of ghost trains. Sometimes they’re for special events, but there’s loads of them for runs to the depot.

They’re not officially documented anywhere, and their runs are mostly missing from the timetables. Some of them seem to be based on the main route numbers, but lots of them are obviously derived from something no longer current, so for the most part there’s little logic to them.

In my book, in most cases the secret numbers shouldn’t be used. If a tram is travelling along a substantial part of the route, it might as well use the same route number. Most people won’t care that it doesn’t make it quite all the way. Or it could use a suffix such as D for Depot — though that would probably require the few 3 digit route numbers to be cropped back to two for simplicity.

(Source 1; Source 2 — they conflict in some places, and the above list may not be complete. The second source includes some old ones which I’m not sure are used anymore. Feel free to post corrections in the comments, though of course it’ll flag you as a bigger gunzel than me.)

15 replies on “The Secret Seven”

And to think, I crossed entire suburbs – striding parallel to parallel to find my way again. But this…this is something new.

If the driver had been showing the correct destination (available on this tram), it would have said Malvern Town hall via High Street, and no questions would be necessary.

73 hasn’t been used for Camberwell Junction for decades. It is now for Glenferrie and Malvern Rds Corner, another Malvern Depot tram.

Of course you are correct, there is no logic to them. I suggest an overhaul and some logic and consistency.

Note that the tram pictured is not the actual tram we caught. It was a Z though, with one of the new LED displays. (I don’t recall if it was a Z1 or Z3.)

For those of us not from/living in melbourne – what do they do at the Depot?

Is it just a change of drivers, or do they have secret tram business going on there?

Going in for the night, or off the road between the peaks, when less trams are running. Buses and trains in other cities would do the same (though they might not take passengers when doing so).

Driver changes are generally done on the road, often at a stop closeish to a depot.

I do find something slightly mystical about tram depots actually. Maybe it’s something to do with the intricacy of the track and wire layouts needed to get them all in and out.

I dunno – I think these mystery route numbers add a certain flavor to run-of-the-mill life in Melbourne. Isn’t it cool that you took that tram (gave you a new blog entry!).

It’s like the ghost stations in New York City, or the stations the U-Bahn stations that were closed in Berlin during the cold war (you could travel through them on a Western Berlin train that snaked through East Berlin territory – the only people on the platform were East German militia with submachine guns). In short, revel in the mystery – there’s not enough of it around these days.

On the 59 Route to Airport West, they sometimes have a 55 to Essendon North. This sort of makes sense to me, cos its not quite a 59…

It’s good that they carry passengers but yes, proper numbering would be good. Some go as far as to follow a radical route compared to the normal service – 9 even follows a section of track that is otherwise not used for passenger services.

Love the depot trams. Works for us because out tram routes are 48/75 and 70 and they all have em and all work for us.

WWW,
Yes you are right, I meant to say 51, but then I read the post properly and see that 51 is aready mentioned. I have seen one 51 goto Essendon North which is about 2Km past Essendon station.

Know your sense of orientation without temptation. The 78 and 79 tram up on Chapel St is the slowest and infrequent services.

There is also a secret route you didn’t mention, usually labelled as a “1”, which goes from Brunswick (Moreland) Depot to East Coburg – not timetabled, isn’t technically open, but picks up and drops off passengers anyway. It is a handy way of cutting some time off if you manage to miss an 8 – all you do is change to a 1 citybound at the Moreland Rd/Nicholson St intersection. It’s often found in the afternoon at the start of the peak, presumably when they need to start a new tram from the 1 route’s terminus. It usually has at least half a dozen passengers on it.

Then there is what happens on days like today, when the 8 from the city doesn’t go on to the depot but turns around at that intersection instead of turning left. Had well over a dozen angry people there this afternoon, after at least four 1s went past in the previous half hour or more. This is not the first time, either.

Flerdle, I used to use that route when I went to Princes Hill Secondary college. It was very occasional, but enjoyable – with no smelly armpits occupying my face.

All East Preston services ran into the city via St Georges Rd until they put in the electric trams along the old Burke St cable tram routes in the 50`s. If the M&MTB`s 1923 plan to have trams to Reservoir (among other places) had come been carried out then East Preston/Bundoora trams probably still would.

Logically the number 7 should go along Commercial Rd/Malvern Rd.