I’ve had something of a fascination with Ikea’s furniture ever since my teenage years when my friend Konrad moved to his new place in St Kilda and showed me the bedroom desk he’d got. It was a huge pine modular setup, full of useful drawers and shelves for his various gadgets and papers. 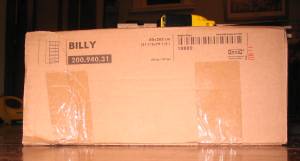 Somewhere I got hold of an Ikea catalogue and started plotting out my own modular Ikea bedroom desk layout, but it never actually happened. In fact it wasn’t until years later that I actually got to step inside one of these wondrous Swedish furniture stores, probably at Moorabbin when I was living with my mum in nearby Hampton.

By the early-90s I was living in Hawthorn, and there were a few trips on the train to the Nunawading Ikea, often coming back with flat-packed chairs in boxes on a luggage trolley we had. Some of those chairs are still going strong, in my kitchen, though if I can find the right Allen key, they do need a little tightening.

Alas, the suburban Ikea stores have closed. Given I’ve spent most of my time living in the southeast, Moorabbin was particularly handy, and most of our family rue the day that it finally shut up shop. No more nipping up the road for a quick Billy and a $5 pack of a hundred tealights — now it necessitates a trip to Richmond (which I’ll blog about another day).

(Ikea are building a store at Springvale, expected to open next year.)

Ikea, being the worldwide collosus that it is, comes in for some flak, of course. Some people like to paint it as McFurniture, though I’m inclined to think that it’s not quite that bad… though there could be a link. It could well be recycled flat-pack cardboard that goes into McNuggets — that would explain a lot.

I still like the idea of modular furniture. I like that with the established lines, you always know what you’re getting — which is quite McDonald’s-like, I suppose. So I can measure up a space, and work out how many Billy bookshelves I need to buy, knowing that they look okay, they’re reasonable quality, and that if I want another to match, or I want some extra shelves or whatever at some stage in the future, I’ll still be able to get them.

But yes, there are niggling doubts. Is it plantation timber? Perhaps not. Is it slave labour? One thing’s for sure — it seems like none of it is manufactured locally. Just about every item has come a long way to be here.

Woe or rue? Both are unhappy.

I LOVE Ikea. Everyone I know bags me for it, but you know what? I don’t care. There’s something about the clean lines and symmetry and simplicity of walking around in an Ikea showroom that gets to me. As cheesy as it sounds, all my cares and worries do kind of slip away.

I’m so glad they’re opening up in Springvale, that’s literally only five minutes away from me!

I was in Ikea last Thursday, and thought to myself that these stores would have lit up the blogosphere if they were launched now.

The make believe rooms, which allow you to feel the joy of living in whichever Ikea wonderland takes your fancy. Or the incessant encouragement to accessorise accessorise accessorise (which I do frequently succumb to). Or the democratisation of fashion, with strangely named designers touting their latest creation…

We have been users of Ikea tealights for many years and I am fairly sure they were originally $13 for one hundred. We did have a dodgy batch once that were made in Checkoslovakia. The next time they back to being sourced from whatever country they had been in the past.

Man I love Ikea furniture, I love putting it together. I like how the Ikea stores are laid out with the arrows on the floor point you to a particular section. The man who started Ikea, who is one of the richest people in the world, is a modest person who does not waste his money on extravagant things and he even catches the train to his work in Sweden.

My kids love to pretend in the made up kids rooms. I love the store. Some good handy stuff, that is still going strong 25 years after the fact (mind you the kids have crayoned on the white table >.<) but otherwise in fine shape.

The furniture you mention me getting when in my teens is still about – twenty years and a continent later. It is now in my 4yo daughter’s room, handed over to her to do what damage she can to it. And just the other day we bought a whole new set of Billy bookcases just like the one in your picture and put them together to store my philosophy and psychology books on. Ikea is not the McDonald’s of furniture. If anything, it is much closer to Apple. The McNuggets theory, however, does have something going for it. I really should try and nibble on a couple of the left-over flat packs to see if I can tell the difference.

I also enjoy shopping at Ikea. I am glad that there is one here in Melbourne (Richmond) to shop at especially since I came to Australia with 2 suitcases, a backpack, laptop computer, and 7 boxes. Their furniture and merchandise is not too expensive and ranges from reasonably good to excellent quality. Most of it is quite stylish too! I always like the pictograph assembly instructions that can be used by any person on the planet no matter what language they speak.

Our nearest Ikea is in bloody Edinburgh (I live in Aberdeen), so it’s not too handy, really.

I must confess I was a bit surprised when I found out that FirstGroup (the local transport co.) run a coach trip to Ikea every week, and that it does rather well. I guess Ikea stuff must be rather good.

On an unrelated note – getting excited about your birthday, Daniel? It’s only next Wednesday! :)

Another IKEA trip: picture frames for my brother’s photos and curtains for my home office.

I learned just the other day that the “good” stuff in Ikea is named after Swedish towns. The lesser stuff is named after Finnish towns. Apparently, it’s a huge political issues and the Fins don’t like it at all! (Or, this is all hearsay because my middle name is gullible…)