In an ideal world, you would hope that when a new estate is settled, they’d provide good quality public transport into it from day one, so that people don’t move in and establish car-oriented travel patterns (eg buy one car per adult, and from thence-forth drive everywhere).

Unfortunately it doesn’t work like that. The Aurora Estate (north of Epping), supposedly the model of green suburbs, was meant to get a train line, but hasn’t yet. Amusingly VicUrban claimed this was no problem: “Aligned with the 2030 planning principles, Aurora has had a bus service since inception”.

Yeeees. That bus service is the 575. It runs hourly, even in peak hours. It stops at 7:30pm. On Saturdays it stops at lunchtime. On Sundays it doesn’t run at all.

Hint: that is nowhere near good enough to encourage people to not drive.

Over in Edgewater, which thanks to dog walks with Marita I’ve seen develop from a flat pile of dirt (as it still mostly appears in Google Maps’ satellite pictures) to an almost fully-occupied estate, apart from the nearby 472, they’ve also just got the 409 bus. Thankfully it’s a tad better than what the good people of Aurora got: it actually runs 7-days-a-week until after 9pm.

But it’s still lacking, both in service quality and launch publicity. 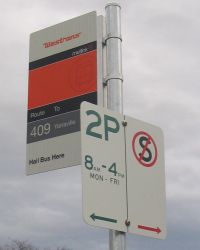 2. They put the new bus stop signs in, but nobody got the council to allocate bus zones for the bus stops, so they’d be guaranteed somewhere to stop.

3. The new 409 and the existing 472 both go from Footscray via the local school then past the Edgewater cricket club. But they take different routes to get there, and they appear to depart from different stops at/near Footscray station. And ideally they’d be timed to alternate along the common part of the route to cut waiting times.

4. Evidently they didn’t tell anybody in Edgewater about the new route. Instead of doing a letter-box drop “Hey! You’ve got a new bus service! Here’s the timetable, and a couple of complimentary tickets so you can try it out!” or a big advert in the local paper, they’ve relied on word-of-mouth. And we all know how well that works.

None of this is very hard to do. Some of it costs real money, that’s true. But it can turn something that’s merely ordinary into something genuinely worthwhile and beneficial.

On the bright side, at least the new Edgewater bus hasn’t been met with the outright hostility the residents of Yarraville and Altona have been dishing out. Some of them, having ignored the community consultation phase, were outraged to have buses going down their streets, and have set up blockades! (Someone should tell them that public transport access adds value to their properties… though that’s specifically trams and trains… a topic for another post.)

In the Altona case, maybe those protesting should spare a thought for the residents of the local retirement village, now disappointed to find the new bus service has been canned. And maybe they should hope and pray that they are never dependent on public transport.

The question does have to be asked though – why /are/ these bus routes going through narrow residential streets? One of the biggest problems with bus travel in Melbourne are the ridiculous meandering routes, which make it difficult for potential passengers to predict where they will be going, make it even harder to know where to disembark if you haven’t travelled the route before and – more importantly – slow the trip down considerably.

It’s really time for a complete shake-up of the bus system. Get rid of all the silly back-street routes and run them along straight-lines on main roads…

In terms of getting the message out and changing behaviours (in this case, getting people engaged in using public transport) – Community Based Social Marketing (CBSM) is a great framework for conducting such initiatives.

Bicyle Vic recently hosted a workshop on the topic and I was impressed by the reported results.

An overview of the process is here – tho you may need to create a login to get to it: http://www.cbsm.com/Reports/CBSM.pdf

More power to the PTUA in getting the message into the heads of our government, that the time for comprehensive public transport has come.

It took me 20 minutes to get to the Murrumbeena shopping centre from Dandenong Road this morning. Watching all those cars waiting with their engines running so the inhabitants wouldn’t cool down made me think about the pollution going into the environment. Yes, I turned mine off. I didn’t have a phone number in my phone to be able to ring someone and let them know there was a problem, it will be fixed for next time.

Who do we lobby to bring the road separation idea forward? If the train went over the road or under the road I would have only been stopped for a minute or so for the lights. I can’t help think of how much pollution that would have saved. Not to mention getting me home 20 minutes earlier.

Daniel,
The South Morang/Aurora issue is a complete joke.
I looked at the prospect of extending the line to Aurora and Mernda on my blog http://melbpt.wordpress.com/2008/05/12/extending-the-epping-line-to-south-morangmernda-and-aurora/ and my conclusion was that the work could be done for the upper bound estimate of around $300m.

I’m not sure why Edgewater needs routes 409 or 472 (or even the 406) at all. Most of the development is within 800metres (what I’d consider the limit of what people will walk to good public transport) of the 82 tram. Putting additional services (and route reform around Highpoint) would be a better use of that money in my view. This releases the buses that would waste time running through Edgewater (although I accept that the 406 and 472 only run around the outside)to other worthwhile routes – boosting frequency. Nobody is going to use a 40 minutely bus.

I will try to put on a wry face – but instead, I’m turned to the demons of cynicism…that nothing positive PT wise will be done whilst we have halfwits like Brumby in power.

Suzie – what you are proposing is a road improvement, to benefit car drivers who won’t have to sit at level crossings, not a public transport improvement.

Grade separation does benefit buses and trams though. In this case, the 822 bus suffers. There’s also the reasoning that it enables more frequent trains, as well as making the crossing better for pedestrians, and less prone to accidents.

Suzie, there’s a wealth of places to lobby: local and daily newspapers, ministers, and your local MPs. http://www.ptua.org.au/help

Yeah … although I agree with you in principle, I have to say I know the streets in Altona that bus was going down, and they are bloody narrow and unsuitable for buses. It’s an area where kids do play in front yards (lack of backyard space in many cases) and if I lived there and had a smelly polluting bus thundering down my tiny street every 20 minutes I might not be too impressed either. I fail to see why an alternative route couldn’t have been sourced using the quite capacious main drags in Altona (and living here, I know the area pretty well, I could draw a couple of alternatives quite quickly and I’m sure others could come up with better ones than I).

The other thing to look at is the specific bus design. While smaller buses don’t bring major economies for the operators (because having varying types of vehicle in the fleet brings problems, and because the bulk of the cost of running a bus is the driver), if the route has to traverse these kinds of areas, smaller buses may be justified. Hybrid, CNG and other cleaner buses are also emerging. They should probably be prioritised for places where they need to idle for periods of time in residential areas.

Some residents were claiming safety issues, eg risk of accidents. I don’t buy that. A bus every 20 minutes down your street is no more risk to anybody’s children than cars. In fact a bus is much more noticeable.

Isn’t the broader issue the political difficulty of change? Somewhere I heard that Melbourne’s bus routes haven’t really changed since 1937. Even Jeff Kennett didn’t try to reform the system. Check out the density of inner suburban bus routes (who also have trams and trains). What hope is there really of substantial reform?

Aurora is a fascinating example. Professor Peter Newman from Perth used to hold it up as s shining example of where Melbourne got it right in transport and land use integrated planning.

Recently in a talk in Brisbane he held it up as a perfect example of what he calls TOD-wash: building up a high(er) density development and forgetting to give it any transit and definitely *not* something to be aspired to.

LesC, what are you talking about? Aurora has no rail line and no plans for one. How that is ‘right’ urban planning is anyone’s guess.

What he’s saying is it was the right plan, but absolutely wrong implementation.