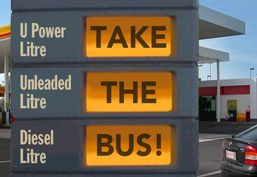 Just following-up the post the other day about high fuel prices, more than anything, hopefully forcing action on public transport.

TonyH pointed me to this excellent article by George Monboit, who notes that so far there is no such action, and that high fuel prices are in fact the biggest thing currently helping to reducing carbon emissions:

What I know and you may not is that the high price of oil is currently the only factor implementing British government policy. The government claims that it is seeking to reduce carbon dioxide emissions, by encouraging people to use less fossil fuel. Now, for the first time in years, its wish has come true: people are driving and flying less.
…
In other words, your (OPEC’s) restrictions on supply – voluntary or otherwise – are helping the government to meet its carbon targets. So how does it respond? By angrily demanding that you remove them so that we can keep driving and flying as much as we did before.

Apparently some road engineers feel a similar way. Of all the things going, petrol prices are helping congestion like nothing else.

But what I really wanted to highlight was this article from the heady, optimistic days of 2004:

Melbourne motorists are likely to pay up to $1.08 a litre for petrol today but the good news is further significant price rises are unlikely.

The RACV believes that while prices have peaked, they are unlikely to drop considerably for the rest of the year.

There is some kind of a peak happening here, and it’s not the prices.

(The pic is from a Crikey article yesterday: “Fiddling with excise as the world burns”, though it no longer appears on the page.)

Funny. The Greens were/are accused of extremism and whacky policies. But the more the environment/peak oil becomes an issue in our daily lives (not to mention ‘Affluenza’), it seems they are the only ones with sensible solutions. We need alternative thinkers in government who will break the mould.

Very true, Tony. I’ve been scrutinizing all the party’s policies and I can say with confidence, and without a shadow of doubt, that they know their onions. It’s just that Australia is stuck with the nostalgic Liberal-Labor feuds which are now just political fossils. Labor and the Liberals share most transport policies – despite their vehement rejection of this notion.

“forcing action on public transport” is a good idea, but only works in larger cities like Melbourne.
I have to drive 36 km one way. By car that’s (I’m early in the morning before the big traffic) 30 minutes.
I have to leave my town, Braunschweig (pop 250 000) and go to a small village. By public transport it would take me – walking to the bus stop not included – 1:58 h – one way.

This is no option.
And don’t think, aw, well, go work for a bigger company, you’ll have a better connection cause many people go there. The company I work for is rather small, my customer, who wants me in his place, not. Other you call Volkswagen small.
Guess I have to rethink car-pooling again, cause public transport (in Germany) cannot be forced to take sensible actions.

Iris, your example is a good one. Without knowing your precise circumstances, there are plenty of trips in lots of western countries around the world which at present are much easier by car than any other way. Action on climate change should mean upgrades to public transport which fix this, but it’s fuel prices which will force governments to act. Touch wood. Otherwise, the impact on local economies will be huge.

Yet if the Australian dollar wasn’t trading so strongly, we could easily be paying $2 a litre.

Daniel, I want to make you aware Atrios a web site by a guy who is an economist and, though it deals mainly with US politics, he often makes comments on PT and the design of cities to favour liveability.

Sigh, don’t complain too much!!!
Here in Victoria BC Canada, we are paying 136.9 cents a litre. :( :( (BTW – That is about $5.44 a US gallon at the moment.) It has been that price for about a week and 1/2 now so hopefully it will not go up again for a while!! (It will definitely go up in time for the Summer Tourists to come to Victoria – July and August)

I know on the East Coast of Canada (Nova Scotia), it is usually higher than that!! :(

Interesting local news in the Moreland area about trams on Sydney road and how their removal will ‘reduce congestion’!
http://www.leadernews.com.au/article/2008/06/02/36207_cov_news.html