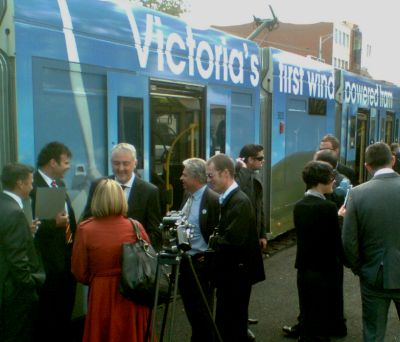 After a little cynicism, I did in fact join in Earth Hour. Over at Marita’s, we shut off all the lights for an hour and survived by the light of the TV, candles and a torch. In fact there seemed to be few lights on in the street, and it was hard to tell how many of the neighbours had joined in. Hopefully most of them.

The whole thing did get me thinking more about my energy consumption, and after some useful comments on my post about power, I’m going to ring up this week and switch to 100% Green Power.

On Friday I was at the launch of the first Wind-Powered Tram. That’s not to say that it has a big sail on the top. Nor does it really only use power generated from a wind turbine. They buy the equivalent of its power consumption from a wind installation. Which is good; it will act as a mobile billboard for Green Power, and should remind us that PT (even coal-powered) is a cleaner way to get around.

I got chatting to one of the guys from the power company, Pacific Hydro. He was saying that things are really looking up for renewable energy at the moment, and that the Howard years had not been easy for them. I guess I’m not too surprised, but it was interesting hearing it from someone at the coalface (if you’ll forgive the expression) of it.

Finally, if you want a laugh, check this press release from the Citizens Electoral Council: Earth Hour: Turn out your lights for World Wide Fascism (WWF)

3 replies on “Hour without power”

I was out fishing all last night, so before I left I went around and switched EVERYTHING from computers to home theatre equipment to even the coffee machine and oven off… I then programmed my garden lights to extinguish from 8pm until 9pm.

So I’ve no idea what happened in my street, but my home consumed nothing but the power of my security system.

Although I’m already underway wiring up and programming my home to cut power to anything and everything non-essential when I’m not home, it was interesting going through the process last night and discovering a few items I hadn’t considered as part of my master plan previously. They’re now on the list.

The best news, however, is I spoke with my wife a few nights ago (she’s a restaurant manager) and they had absolutely no intension of doing anything. I suggested placing candles on tables and turning out the lights would not only make for an interesting evening, not only send a message to your customers, but anyone outside the restaurant may see they are the only (or one of the only) ones taking it seriously. She didn’t seem to receptive to the idea, but when we all got home last night/this morning she explained that she did end up doing exactly that – and while a few customers whinged everyone was extremely pleased and supportive of it. They did leave the kitchen lights on obviously, but apparently one of the cooks removing a couple of fluro tubes so that they were at least not using as many as usual.

Will be interesting watching the news to see how much effort everyone else put in, and whether it’s making anyone “think different” herein.

Those CEC people are actually fascist in a text-book sort of sense and yet they’re purporting to be this collective of expository gurus with extraordinarily good hair. What retards!