SMS from an unknown number on NYE: “Happy New Year”. The number looked vaguely familiar, but I couldn’t work it out, and it was bugging me. Who could it be? I eventually replied saying “Happy New Year, but who is this, I don’t have your number in my phone.” They replied saying “Sorry, meant to dial xyz. But have a good new year anyway.” Ah, a wrong number – that would explain it.

A couple of Christmas cards addressed to people who don’t live here. I didn’t really know what to do with them, since neither had return addresses. Eventually I put them both back in the mail marked Return To Sender, and hoped the Post Office might be able to figure it out. Then a few days later, a neighbour said hello and asked if I’d got a postcard for him, and told me his surname, which I hadn’t known. Whoops. If I was smarter, I’d have checked the phone book for a matching name elsewhere in my street. He’s in there, too. Maybe Aussie Post’s Dead Letter Office will be smart enough to do that for me. Apparently in December they got 184,469 items to wade through, so it could take a while.

I found a plastic container while I was digging through the cupboards the other day. Very rounded. And not mine. I’m not sure whose it is — possibly someone in my family brought over some biscuits or something and left it behind. Or maybe it’s from Marita’s place. Or maybe it’s one of the people who came for my birthday. Anybody recognise it and want to claim it? 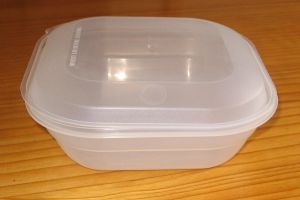 Daniel,
re: mail mysteries. Yes, the phone book usually solves it. A few times we have got letters addressed to someone else (but with our address). A check of the White Pages and it’s usually someone a few doors away.
Rog.

So did you own up to having received the postcard?

The plastic container isn’t mine. (Hope that helps!)

I scored a really nice (ie, expensive) Tupperware container after my housewarming party. No one admitted to owning it, so I eventually just “accepted” it as a housewarming gift.

Rae, yes I mentioned having got the Christmas card. He didn’t seem worried about it.

that’s a microwave container. great for zapping frozen veggies. did someone give you some leftovers?