Last night I saw the Bourke Street decorations by night for the first time. 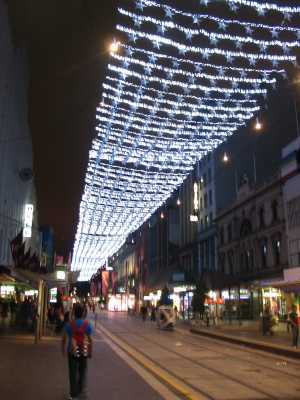 But I was in a bad mood this morning. After a recent good run, I had two hassle-filled commutes in a row — last night at 10:30 the trains were still stuffed after the storms, and this morning, well dammit, I was just about at the station three minutes before the train was due, but then another train went over the crossing, and I had to watch helplessly as the 9:21 left two minutes early.

And I had come to the realisation that here we are, four days before Christmas, and I’d completed virtually none of my Christmas shopping.

A lunch with colleagues cheered me up a bit, but this afternoon stomping about the CBD rain, I was actively considering scrapping what few Christmas gifts I’d had worked out, and giving everybody either

a) nothing at all — damn throwaway consumerist society, that’ll show those shopkeepers

b) gift certificates — I don’t have time for this, you choose something

or
c) a goat for an impoverished village from Oxfam Unwrapped — hey if you want to go for broke, you can buy a bridge for $675.

Things improved slightly after that, and I did find a couple of good, worthwhile presents for people. But I’m keeping those options open.

I’m feeling the same way. But gift certificates? They’re like cash… but not as good. Just give cash. Unless you are giving a service, like a certificate for a massage. Or I guess a certificate at a book store. But not a generic ‘shopping centre’ certificate, please say it isnt so. Get the goat! And give it to your loved ones for an Xmas to remember.

Yeah, bah, humbug indeed! But honestly, for the way our family is spread out from the East Coast to the West Coast on Vancouver Island, gift certificates do make sense. Esp. internet ones! And E-Cards as well instead of mailing Christmas cards. Yeah, not as personal, but saves the trees, and the trouble of stamping them all after writing them all. :)
That goat looked cute! I saw it in the Oxfam catalogue, and wondered “who’d appreciate that in my family?” LOL…

Last year my in-laws (who live in the other hemisphere to me) gave me a sewing machine and my husband a goat for an Oxfam family. I thought it was the best present yet. No wasted postage or something which I don’t like/doesn’t fit.

I often wonder how the goat is going and what has been created on that sewing machine.

Daniel
keep your chin up! Christmas is a very stressful time of year – only a few days to go and it’ll all be over.
I just bought books for everyone this year – it involved ONE trip to ONE shop, so that’s another idea.
Rog.
PS Cancelled train on Thursday evening AND on Friday morning. Grrrr!

Okay, last of my gift-giving is done. I did give the gift of supporting a child to my brother and his wife. Better to spend the money on helping a child, correct? And the children’s teachers both got a jar of jam. :) LOL, that way, they can eat and enjoy it.