And to so our final day in Adelaide. After breakfast we packed up all our stuff and checked-out, leaving the big backpack with reception to pick up later. Then we moseyed down North Terrace, passing the South Australian Parliament building, where Mcleod’s Daughters was being filmed for, as the Adelaide Advertiser reported, “a storyline where the farm is under threat again”.

We were headed to the Adelaide Museum, which to the delight of this tourist with his rapidly draining wallet and bank account, is free to enter. We were a few minutes early for the 10am opening time, and had a sit-down outside, watching the people and the traffic nearby, and the growing numbers of young school kids also preparing to visit.

We shot in as soon as the doors opened, before the school parties had time to organise themselves. First stop was the ground floor World Mammals exhibit, a very interesting display of (stuffed) animals, as well as Max the Human Skeleton, who had left his body to science when he died in 1913. We cut that short when the first hordes of school kids tramped in, and went upstairs.

This proved to be a successful strategy, as we explored the museum, staying one step ahead of large numbers of kids along the way. We found a displays on Pacific Cultures, Egypt, butterflies, Antartica, and the inevitable dinosaurs. The kids liked the Giant Squid (whose display went across four floors). A space display included a Cosmonaut suit worn by Adelaide local boy Andy Thomas. It looked awfully small; either it had shrunk, or he isn’t very big.

There was a big section looking at Aboriginal tribes and culture; very interesting. They had a map of the various tribes that had once inhabited the various parts of the country.

After leaving the museum we went up to Rundle Mall. I’d noted an ad in the morning’s paper for the EzyDvd Ultimate store, and I always find it difficult to resist cheap DVDs. We picked up a couple of bargains (Mr Bean’s Holiday for the kids $10, Brazil for me $2.50!) before finding lunch at Subway in a nearby food court. Then we walked along King William Street via the quite chaotic Adelaide Metro shop, noted buses doing hook turns at North Terrace, and continued down to the Torrens, for a stroll along the riverbank. Which was extremely nice in the sunshine, I must say.

Back to the hotel to get the bag, then onto the bus to the airport. We checked-in and lazed in the terminal, waiting for departure time. 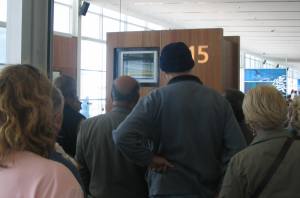 Melbourne Cup time was approaching, and as people started to crowd around the monitor screens to watch the race, we took a look in the newspaper to choose a horse each. I chose The Fuzz, which I later discovered had been scratched. Jeremy had rather more luck, choosing Efficient, which won. He seemed quite pleased.

The flight was uneventful, apart from a kid in front of us who decided to put his seat back almost as soon as we’d boarded, to Jeremy’s consternation. But happily, one of the stewards directed them to put it back up for take-off, and it stayed there for the rest of the flight.

Skybus and train home, as per last year (I’ve finally figured out that the Connex SMS timetables give you the wrong timetable on public holidays), encountering some of the Cup crowd on their way home too. Home in time for dinner.

I wasn’t going to do this, but the kids suggested that (like last year) I track all the costs for this holiday. So here we go again:

That’s a total of $1623.55, compared to $1254 last time. Given that this time I paid full costs for the flights (it was on points + fees last time), and this time I was more thorough in tracking everything, I suspect it’s about on par.

As per usual though, the main thing was that we had a good time.

Time to start planning the next short break!

Gee, your boys are growing up!

We have exported our hook turns to Adelaide? They better be paying us a license fee.