I’d booked a car for the day, so we could head out of the city, see the countryside, and so we could visit the St Kilda tram museum and adventure playground, the former only being open on Sundays, and both of them being impossible to get to by public transport. (They’re about 2km from the nearest bus route… which doesn’t run on Sundays anyway.)

But first there was breakfast. We went down to the ground floor cafe/restaurant/thingy, the jawdroppingly inspiringly named “Cafe 31” (‘cos the hotel is at number 31 in North Terrace). The kids decided to run the two storeys down the fire escape, racing against the lift — something they continued to do for the rest of our stay. On the way down, they’d usually beat it (it was a pretty slow lift). On the way up, the lift would usually beat them.

Looking through last year’s trip entries, I note the full buffet breakfast at the Travelodge in Sydney was $16.50 for adults and $7.50 for kids, which I thought at the time was a bit pricey, but ultimately worth it. Here? $18.90 per person, with no discounts for kids. $56.70 for breakfast?!? Yeeeeouch! I know, I know, you’re paying for the convenience of it all. We paid up this once, but I vowed to restrict us to the Continental breakfast the next day. Not that it wasn’t tasty, but jeez. I made sure to grab a complimentary newspaper to try and get my money’s worth.

After fuelling up we headed out. First we walked up to Rundle Mall, looking for the market. Eventually we found it at the point where Rundle Mall becomes Rundle Street (but before it becomes Rundle Road… who was Rundle, anyway?). The market didn’t look like very much we couldn’t find at the markets in Melbourne. Besides, handcrafted stuff bore my kids stiff, no matter how nice it is. And frankly I’m not that enthralled myself. So we backtracked to the Avis car rental place I’d booked with, back on North Terrace.

The Avis lady behind the counter seemed a little stern and business-like, but I expect I would be too if I had to work from 8am on a Sunday morning. She said we’d got an upgrade (I booked a Corolla, we got a Yaris; what a silly name) and gave me the key and the directions to the carpark, which was a couple of doors up.

We found the car, and navigated our way out of the carpark and around the block to head north along the A1. It was about 10:30, and the tram museum didn’t open until 1pm, so I had in mind to explore a bit further north, find some lunch and then head back to it. I’d considered heading up to somewhere called the Samphire Coast and in particular the Clinton Conservation Park, though the information I’d found on the web was a bit vague about where to find it.

None of us are used to long car drives, and it became apparent that there was probably less time available than I’d thought. By the time we got to Port Wakefield, all of us were sick of being in the car, and it was lunchtime. So we stopped at a bakery and then headed south again.

The land by the highway was looking pretty desolate. If you look at the high-level satellite pictures it looks lush and green, but zoom in and you’ll see what I’m guessing are more up-to-date pictures, showing a dry and harsh landscape, no doubt drought-affected.

At Dublin we made a quick stop to buy some fruit. I was getting a little wary of the amount of junk/fastfood we’d been eating, so we stocked-up on bananas and apples. They also had some yummy-looking banana chips. 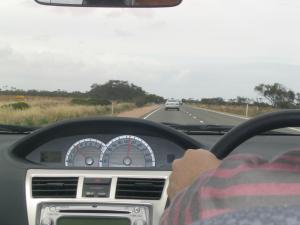 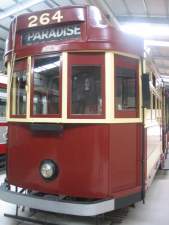 Somewhere between Dublin and the intriguingly-named Lower Light, whoever owned the land by the highway had put up a variety of entertaining sculptures, perhaps to keep car occupants from getting too bored with the flat surrounds. They included everything from a UFO to Ned Kelly to a robot to a giant cockroach. The kids had the camera at the ready as we went past again, and we did a quick U-turn to do another couple of passes and got some pics, though at highway speeds some of them turned out a little blurry.

We got to the St Kilda tram museum just after 1pm. It’s a rather marvellous collection they’ve got there, and we had a good look around the sheds before taking a tram ride on a Sydney R-class tram number 1971 (like the ones we saw last year) out towards the beach. Though the track goes further, the tram stopped at the Adventure Playground, and we got out to take a look.

Needless to say, the kids were thrilled: there’s big slides, flying foxes, swings and roundabouts, see-saws, underground tunnels, a maze. Not to mention a castle by the sea with a dungeon, and a nearby pirate ship — it was like something out of the Famous Five.

There were a couple of mishaps, but we all had a merry old time for over an hour before boarding the tram back to the museum. We had a bit more of a look around, then they said one of the classic Adelaide H-class trams was moving out, so we took a ride on that. It had been stunningly restored, all lovely varnished wood inside. Beautiful.

Arriving back at the playground, we elected to burn off some more energy there, so there was another round of flying foxes and sliding before finally heading back to the museum and the car.

By that point we were pretty tired from all that activity, so we headed back towards Adelaide.

Because all the hire car places close early on Sunday afternoons, we had to keep the car overnight, so the plan was to fill up with petrol before taking it back to the hotel carpark, and to return it in the morning. Naturally I had trouble finding a petrol station, and somewhere in North Adelaide we ended up doing a U-turn to fill up. Evidently the guys behind the counter at the petrol station weren’t familiar with the BankSA/St George conglomeration, as they were somewhat amused by the dragon logo on my Visa card.

Then we negotiated our way (via many “No right turn” signs on King William Street which eventually had me doing three lefts instead) back to the hotel.

After a rest, we set out again on foot to find something for dinner, ending up in the self-proclaimed Pasta Palace in Hindley Street. The guy taking our money afterwards reckoned the big waiter/chef statues about the place were in fact a Pasta Palace innovation, which had since been exported to Italian restaurants the world over. Hmm, okay.

Alas, nothing on TV (curse the hotel room with no cable) so we ended up watching the camcorder footage… though as I’d left the TV cable behind, it was in small-O-vision on the camera’s own screen. Entertaining enough though.

Daniel
I’m exhausted just reading of your adventures. I agree with you over the rip-off charges for city hotel breakfasts – I guess most guests have expense accounts. The adventure playground looks fantastic. When did Sydney have trams? Before the war?
Rog.

I;d forgotten the children’s playground with the “pirate ship” at the beach terminus. A group of grown UK tram enthusiasts amused themselves for some time there! (It was the time of the Iraqui boat refugees having an uncertain future in Australia then and someone remarked that it was good of them to leave the boat right there on the shore!)

Note to Daniel: Have you been listening to Paul Kelley’s “Adelaide” a lot lately? :-)

Note to Roger: Sydney’s last conventional trams ran in 1961 (althoug there is a solitary new Light Rail line there again).

Love that playground! Now I want to take the kids to Adelaide just for that. :)

More than just a little ironic that you couldn’t get to the tram museum on Public Transport!

You must come to Adelaide again, and this time have a local (me) be your guide.
So far the blog has only got up to Sunday, and it sounds as if you had a few high spots in lots of boredom.
You schlepped all the way out to St Kilda, driving around to kill time beforehand, but didn’t get to see the St Kilda Mangrove boardwalk.
Let’s hope you found the Central Market on Tuesday.

Few of my pictures turn out as well as yours Daniel. *sigh* I guess practice makes perfect. I particularly like the photo of the H-360. Thanks for sharing your Adelaide weekend adventures with us. Hope the young fellas enjoyed themselves too.

Rae, it’s a great playground. Though there’s a good one at Warrnambool which is almost as good, IIRC. I wonder if there’s something similar in Melbourne.

Gav, the Bylands tram museum near Melbourne is the same. Can’t get to it except by driving.

Chumley, we had a lot of fun. I like exploring, though yes, a little more forward planning would have helped. I’d been told the Central Market was basically the same as Melbourne’s Queen Vic market, so I’m not fussed in having missed it.

Indeed, the “East End Market” has turned out to be more controversial and less successful than the Council thought it would be.

Pity you had to go to North Adelaide in search of petrol – there are four quite good servos (that I know of – there could be others) within the “confines” of the CBD “square mile” (North Terrace, East Terrace/Hutt Street, South Terrace, West Terrace), and as far as I know they’re all open all week.

And, of course, the “No Right Turn” business along King William Street has been there for some years, although they used only to operate during peak hours. They only became “permanent” a few months ago with the extension of the tram from Victoria Square to the Uni campuses area at the western end of North Terrace (not far from your hotel).

Re: breakfast – had you thought of taking some plastic bowls and spoons, buying a box of Weetbix and a litre or 2 of milk at your destination, and saving yourself a bundle on the meal? Even if you bought yourself new bowls and spoons you’d still come out under $10! Country town Adelaide may be, but not so much that you can’t source breakfast essentials.

Or am I just a tight arse who’s unwilling to front that much for breakfast?

Wish I’d thought of that Ziggi… though it’s nice to be away on holiday and enjoying a big breakfast that someone else prepares!