Went to the school concert last week, which was at Monash. Mucho traffic congestion on Wellington Road due to roadworks. Some people who you’d think could figure out a simple row/seat ticketing system seemed to be very puzzled. Some toddler sitting behind me yapped through much of it. A mad woman (probably someone’s grandmother) started shouting towards the end. “Shut up! Shut up! Get out!” But all in all, quite enjoyable.

And then Paul Kelly at Hamer Hall on Friday night, a birthday present from Marita. (Almost forgot to take the tickets.) Great show. The entire new album in order, followed by loads of hits, including some oldies like Under The Sun. Sadly the audience was a bit staid. I was bopping around to the music, wondering why those around me who had paid for these good seats weren’t moving.

In a very clever move, they recorded the show for release next week as a download at liveband.com.au. They promoted it by handing out CD slipcovers. Neato, I’ll be coughing up.

Even the support act was bearable (sadly sometimes they’re not).

The show finished about 11:30 and we got to the station to catch the 11:45 train home. All went well until we got to Ormond, when a drunk man in a suit, looking quite green, decided to block the doors so he could spit. He did this a couple of times, and before we knew it, the doors wouldn’t close. Siemens’ fine workmanship strikes again.

The driver came down to take a look. With help from passengers inside, he tried to push the doors closed from the outside. No luck. He went back to his cabin, while the drunk man tried to look inconspicuous.

A couple of minutes later the driver came back with his radio. After conferring with some distant colleagues, he gave the doors an almighty kick. (If you’ve seen the train doors in question, they move inwards as the final part of sliding closed). Still no luck. He went back to his cabin. 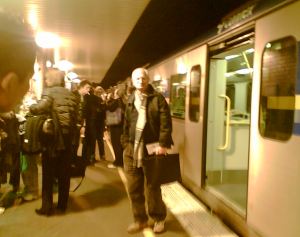 His weary voice came over the PA. Sorry. If the train doors won’t close, we can’t carry passengers. You’re all going to have to get off and wait for the next one. Collective groans all round. We disembarked.

Two policemen wandered into the station, wondering why the North Road crossing gates had been down for 10+ minutes.

The station PA cracked to life. The following train was at Caulfield, just 5 minutes away. Not too bad. The empty train moved off (with the doors now looking suspiciously snug), as did the policemen.

We could see the lights from the next train in the distance. The automatic announcement piped up to tell us of its imminent arrival.

Then there were gasps. Another drunk man had fallen onto the tracks further along the platform. While someone hit the platform “red button” to call for help, a bystander (who I shall henceforce refer to as The Hero) leapt down to help him. I was trying to run along the platform to signal the driver to stop, but couldn’t get past all the people.

With help from those on the platform, The Hero got the drunk man back up off the tracks. But he was running out of time before the train got to him, so he ran to the other platform and jumped up. He was okay, but had injured his knee. We shouted to him to run via the underpass back up to our platform to catch the train.

The train came in and The Hero appeared coming up the ramp, limping a bit. He got on board.

With everybody aboard, the doors closed and we moved off. Someone started clapping, and before long our half of the train were all applauding The Hero. “Onya mate!”

We got home without further incident, apart from muttering under collective breaths about Siemens, drunken businessmen on late-night trains, and telling a Martin Merton poster at Bentleigh Station to go away.

Train travel is normally relatively uneventful. It’s the one-in-a-hundred trip that you remember, and that no doubt several hundred people have been telling their friends all about over the weekend.

And it leaves questions. There’s meant to be TravelSafe staff on trains after 9pm. Where were they? How can a door so easily go out of commission?

And if Paul Kelly had been there, would he write a song about it?

8 replies on “Two concerts and a train ride”

WELL! I had the most hideous experience on Friday night coming home when some drunk guy vomited TWICE in our carriage!!!

Daniel
what a story! And well told!
And to think I was pissed off this morning only because my train was cancelled.
It’s great to hear that heros still exist – people who are prepared to take a moderate risk to save the lives of others.
Sadly, that’s why a lot of people won’t use the train at night. Too distressing and time consuming.
Rog.

Jealous about your Paul Kelly concert!

Would still love to see him live…This audience member would be bopping!

We had a bit of an incident on the train on Sat arvo, on the way back from the over-priced Pixar exhibit at Fed square.

There was some loony ‘I’m the only gay in the village’ twit kid, could only be mid teens, prancing up and down the carriage singing along with the show tunes blaring from the tinny phone speaker, actually dancing OVER and UNDER people. Crowded train, after the footy as well. Well I can only take so much stupid behaviour, so as he attempted to twirl past for the umpteenth time, I stood, blocked his path and loudly told him to sit the hell down, and shut the hell up!

Well I have to say it is very invigorating verbalising ones pent up frustration, and the look of relief on the faces of the old people around was worth it. We don’t pay to watch these prats making an arse of themselves! If we want to do that, then just watch Australian Idol :-)

Wow, quite the nights entertainment and drama you had, for sure! Scary when that sort of thing happens indeed. Silly people who drink too much. I’m glad I did that when I was 20, and not since LOL! Nah, got over it when I met my dear Tim, and grew up (got some sense into me with a serious car accident).

Okay… so did anyone (Connex, police, gay Russian mafia, etc) actually come when the red button was pushed? Did you see? Would have loved to have been there on the platform. I love drunken businessmen.

Guessing that while the driver was able to close the door, it would have probably been on some sort of override system to close it that may not be suitable for service. I’m a bit shocked that the carriage didn’t turn on Mr Door-rooter though seeing as it was his own fault. Next time bring the torches and pitchforks!