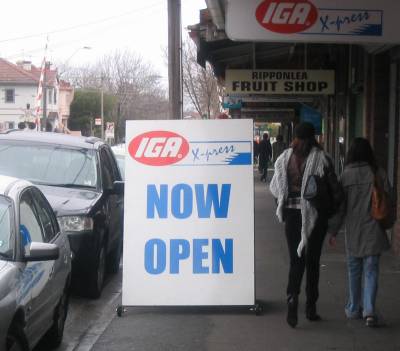 You know those sandwich board advertising things? A-frames, I’m told they’re called. The IGA in Ripponlea has recently got one. It’s as big as a person.

On the bright side, it’s unlikely to blow over in the wind. Though if it did, it’d probably kill somebody.

Update: Speaking of advertising, I just added Google ads here. I’m not convinced it doesn’t make the site look cheap and tawdry, but I’ll give it a go for a week or two.

Daniel
wot’s your opinion of IGAs? Small and friendly? Supporting local neighbourhoods? Or expensive, only to be used in an emergency?
Rog.

I use the supermarkets that are most convenient to me, by location. This is almost always Coles and Safeway (both being less than ten minutes walk from my house). So for me, yeah, I’ll only shop at IGA if I happen to find myself in urgent need. My impression is that they’re a little more expensive, and have less range (due to the stores being smaller).

many smaller supermarkets actually have a larger range. this is due to the two biggies gradually phasing out multiple brands of product x and replacing them with house brands.