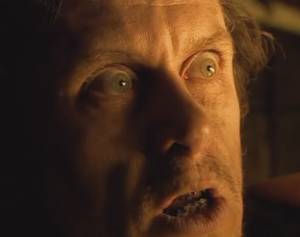 When I last went to the dentist, they said I had a touch of gingivitis, and suggested mouthwashing for a couple of weeks.

It’s obviously pretty powerful stuff, because apart from any cleaning it’s doing, it makes my teeth look horrible, in a way that mere toothpaste can’t fix. My teeth now resemble those of Peter Street (the Architect of the original Globe Theatre) in Saturday’s Doctor Who. It’s not a pretty sight.

So I stopped on the mouthwash for a bit.

I resumed a few weeks ago, and I’m heading off to the dentist again today, so hopefully that’ll be enough, and they can then thoroughly clean my teeth again so they don’t look like I’m from the 16th century anymore, and I’ll be able to grin at people again without getting funny looks.

Update 11pm. The dentist had to get out the big guns to get the mouthwash stain off. It was like sandblasting my teeth. He’s now put me onto an alternative brand which apparently won’t cause discolouration.

3 replies on “Back to the dentist”

You know what worked wonders for me with slight gingivitis? Buying one of those home oral irrigation devices i.e. WaterPik and using it religiously, once per day. It’s amazing the amount of “gunk” that comes out even after brushing. It’s actually as good as flossing, apparently, and easier. As the dentist said to me, what good is flossing if you hate doing it, and don’t do it? Better to use this device and like it, and then you’ll do it more often. From having him say “um, if it’s not cleared up in 2 weeks, I’m sending you to a peridonist, to him saying wow, your gums are looking very healthy was a matter of using it religiously every single evening. :)

My wife is a dentist, so she would like to know what kind of mouth washing you were using… was it Listerine?
Also, be carefull with whitenings, because it is done with acids, and you have to keep certain habits after the treatment is done, like no cafe, no smokes… if you do that, you will get worse color than before.

They’ve now put me onto Curasept, which apparently won’t cause any more discolouration.