In Christmassy terms, I had a very successful couple of days — on Friday I managed to get my Christmas cards (and annual letter) to UK relatives into the mail. I’ve gradually reduced the number of cards I send every year as more people get email. I’ll do some kind of email card in the next couple of days to most of my remaining relatives, but most of the UK ones remain steadfastly offline. With a bit of luck, the paper cards will reach them all in time.

On Saturday I braved the fray at Southland. I didn’t actually find of the presents I’d gone looking for, but did find a couple of things for various people.

And I found something for me. It seems an almost inevitable part of Christmas shopping that I’ll find more cool stuff that I want than for anybody else. 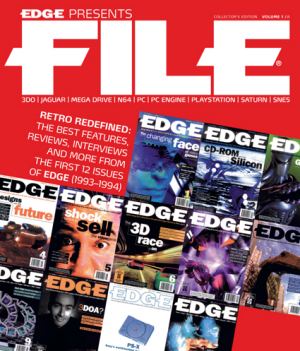 A couple of weeks ago I was trying to track down a magazine, an air-lifted obscure one. The distributor’s web site said it was available through only a few newsagents around Melbourne, and the CBD ones quoted were all sold out. They listed one in Charman Road, but at the time I couldn’t recall where that was, so decided to forget about it.

But I found myself in Charman Road, Cheltenham on Saturday while I was walking from the station to Southland, and saw a newsagent — the very one listed. Doubting they’d still have the mag (apparently it sold very well, and very quickly) I nevertheless nipped in to check. They still had three copies. Apparently, despite their stocking of obscure overseas airlifted magazines, they don’t sell all that well in the burbs. Score!

The mag? A retrospective issue of Edge, the videogame culture magazine. Why had I wanted it? Because I’m regaining my interest in games, and this particular issue, flashing-back to 1993-94, goes back to about the point I started to lose interest post-uni, so it serves as a nice catch-up.

Edge is an inestimably cool magazine. The format, the quality paper and printing, the research, the articles, the whole package. It ain’t a straight review of games, like its predecessor the much-loved ACE. It goes deeper, into the culture and creation of gaming. In the past I haven’t bought it often, maybe once a year, but it’s always had interesting stuff in it.

Imagine my surprise when, on the way home, reading the article therein about the founding of the magazine, I discovered one of those who was heavily involved in creating Edge, the founding publisher, a bloke called Steve, is someone I know through my sister.

4 replies on “The unexpected connection”

On a totally unrelated note, have you seen the print edition of The Age today (Tues)? What’s happened to the masthead? It looks like it’s printed at abou 80 DPI!

Another good read on videogaming culture and industry (as opposed to game reviews) is the online zine “The Escapist”. Excellent production qualities, and pretty good writing too.

http://www.escapistmagazine.com/ is where to find it – I prefer the PDF download, but they have it in HTML as well.

There are a couple of retro-gaming magazines that look interesting, $14 a pop though.

Yeah Tim, I bought one last week that highlights the Commodore 64 this issue. Enjoyable reading.